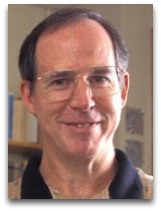 In hmolscience, Ronald Forest Fox (1943-) is an American physicist noted, in animate thermodynamics, for his 1988 work on what he calls the uroboros puzzle, namely how life arose from non-life, which he reasoned has to do with energy flow through matter.

Overview
In 1957, Fox, at the age of 14, began to first think about the role of energy in biological evolution, at about the age of 14, when he would visit his father’s laboratory and observed the divisions of microspheres in Brownian motion and the assembly of proteinoid microspheres in test-tubes through a microscope, becoming fascinated by how the mixing of salts, sugars, and lipids would assemble in to structures. [1] Fox graduated from high school in Tallahassee, Florida, in 1960, finishing fifth out of 610 students, excelling greatly in math. At the age of 16, he entered Reed College, Portland, Oregon, completing his BS in physics and mathematics.

In 1964, Fox entered Caltech as graduate student in physics. [2] The following year, however, being dissatisfied with the teaching at Caltech, Fox switched to the mathematical physics department at Rockefeller University where he studied advanced thermodynamics under Dutch-born American physicist George Uhlenbeck and Polish-born American mathematician Mark Kac. While there Fox developed his knowledge of molecular biology and bioenergetics through exposure to the works of German-born American biochemist Fritz Lipmann and English biochemist Christian de Duve. In particular, as to direction in his later energy flow theories, Fox seems to have been significantly influenced by Lipmann’s 1941 work on idea of phosphate being the universal energy currency in biological systems, on the subject of the energy released during phosphoryl transfer from ATP used to drive biological processes. [4]

In 1969, Fox completed his PhD at Rockefeller University with a dissertation on "Contributions to the Theory of Nonequilibrium Thermodynamics". [3]

In 1988, Fox, in his Energy and the Evolution of Life, argued that the flow of energy through matter was the impetus for the origin of life and for the continued complexity of evolution as it occurs. He defines the issue of how life arose from non-life as the uroboros puzzle. Fox also suggests that cultural evolution can be explained through this same process. The following is a representative excerpt quote:

“Energy flow supports the existence of life’s dynamic molecular state and is the key to evolutionary trends.”

Of note, similar to the work of English physicist Keith Burton, the book contains a large free energy of formation table for number of different biochemical species of importance. The book is a result of a fellowship and grant to study the physical basis for biological evolution, through which Fox devoted the 1984-1985 academic year exclusively to these studies. [1] Fox was a great intellectual influence to American chemical physicist Joel Keizer. [4]

In the 1970s, during a visit with Norwegian-born American physical chemist Lars Onsager, whom Fox had met as a student at Rockefeller University, during the years 1965 to 1969, Fox asked Onsager whether he thought statistical mechanics would have a significant impact on the study of biological questions, such as the origin of life, to which Onsager replied abruptly “No”.

Difficulties on theory
A central issue in Fox’s perspective, a common one in life theories, is his contradictory supposition that on one hand life is “dependent” on the energy of the sun but on the other hand life is a “self-generating and self-sustaining” system. One cannot be self-sustained if it is vitally dependent or rather driven by an external supply. The latter supposition contradicts the former. The family of self-terms: self-organizing, self-sustaining, self-generating, and the like, are paramount to perpetual motion machines, and thus invalid descriptions of fictionalized isolated systems.

Of note, in his treatise, Fox explains why the prefix "self-" must be carefully used. Energy, for instance, drives processes that are structurally "self-replicating" like RNA molecules inside a vesicle. Likewise, according to Fox, self-assembly of membranes is almost “self-”, but is driven by the release of entropy. [5]

Education
Fox, after completed his 1969 PhD in thermodynamics, completed his postdoctoral work at Berkeley. In 1988, Fox was a professor of physics at Georgia Institute of Technology, producing graduate student PhDs until 2007. He is currently a Regents’ professor emeritus of the school of physics.