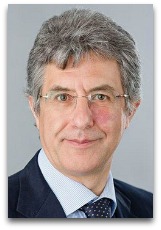 In human physics, Mantegna Rosario (1960-) is an Italian physicist and econophysicist noted for his 1990 to present work in econophysics.

Overview
In 1990, Rosario began promoting econophysics, via the area of the analysis and modeling of social and economic systems with tools and concepts of statistical physics.

In 2006, Rosario did the first English translation of Italian engineer-physicist Ettore Majorana’s circa 1933 article “The Value of Statistical Laws in Physics and Social Sciences.” [1]

In 1999, he published the first book on econophysics; after earning his tenured position in 1999, he founded the Observatory of Complex Systems, a research group of the Department of Physics of Palermo University, focused on econophysics. [2]