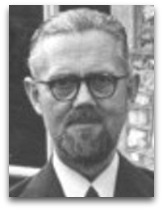 In science, W. Ross Ashby (1903-1972) was an English psychiatrist, mathematician, neuroscientist, and cybernetician noted for []

In 1947, Ashby followed this up with a concise set of principles of self-organizing systems, postulating that “a machine can be at the same time (a) strictly determinate in its actions, and (b) yet demonstrate a self-induced change of organization.” [2]

In 1952, Ashby, in his Designs for a Brain, as summarized by Judson Herrick (1956), was outlining some type of mechanical principles based model, via sections such as “state-determined system”, “organism as machine”, “molecular-basis for memory”, among others; some of which, however, seems error-filled, for example: [7]

Ashby, as summarized by American neurological anthropologist Terrence Deacon, defines a self-organizing system as one that spontaneously reduces its statistical entropy, but not necessarily its thermodynamic entropy—[a statement that, to note, makes no sense]—by reducing the number of its potential states, and in doing so equated self-organization with self-simplification. [1] Deacon attributes this entropy self-organization definition to one of Ashby's 1947 publications; possibly his “Principles of Self-Organizing Dynamic System” (check)? [4]

In the 1950s, the work of Ashby was being incorporated into the writings of those such as American mathematician Norbert Weiner. By 1960, the term self-organization was being found convoluted with entropy explanations.

Self- | Issues
In 1961, Ashby notes that: “the adjective [self-organization] is, if used loosely, ambiguous, and if used precisely, self-contradictory”. [2] On the question of organization, Ashby is quoted as asking the question: “can a system be self-organizing?” To which he answers: “no system can permanently have the property that it changes properties.” [6] The following is another representative view:

“No organism reproduces itself. The only thing that ever has had such a claim made for it was the phoenix.”

Information theory
Ashby's views on entropy, to note, seem to be predominately incorrect, being that at some point he began convolute his ideas on brain self-organization together with American electrical engineer Claude Shannon’s ideas on information entropy, in other words he took a ride on the Shannon bandwagon. [3]