In existographies, Rudolf Clausius (1822-1888) (IQ:195|#7) [RGM:1264|1,500+] (GS:5) (SIG:3) (RE:66) [CR:829] was a German physicist noted for being the central founder of thermodynamics, which he accomplished through the publication of his nine memoirs on the mechanical theory of heat (1850-1865), as contained in his 1865 textbook The Mechanical Theory of Heat (Mechanische Wärmetheorie), and polished and re-ordered textbook like 1875 second edition, therein defining the two main laws of the universe, i.e. the first main principle (first law) and second main principle (second law) of thermodynamics.

Overview
In 1850, Clausius, in his first article “On the Moving Force of Heat and the Laws of Heat which may be Deduced Therefrom”, grouped and refined the earlier work of French physicist Sadi Carnot (Reflections on the Motive Power of Fire, 1824) on the assumed reversibility of the working body together with the mechanical equivalent of heat measurements of English physicist James Joule ("On the Mechanical Equivalent of Heat", 1845), in the development of the conservation of energy, thus framing the outline of what he called the second main principle and first main principle (second law and first law of thermodynamics), respectively, in equation format, later encapsulated in the form of the ten fundamental equations of thermodynamics, as indicated by roman numerals in the second edition (1875) of his textbook. [1] The following is the gist of his quantitative re-formulation of heat in respect to the Carnot cycle: 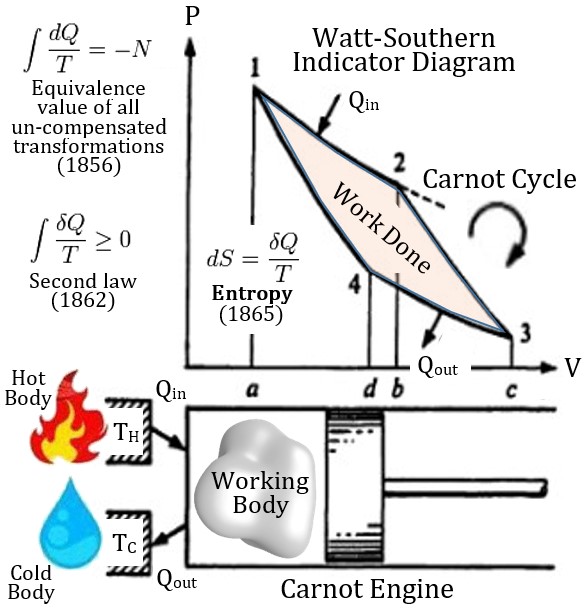 In Clausius' nine memoirs, through the development of his conception of quantity entropy, symbol S, and its relation to irreversibility in engine cycles, Clausius pulled together a number of philosophical cornerstones, such as time, heat, friction, chemistry, transformation, spontaneity, conservation and others, into one cohesive theory namely the first and second laws of thermodynamics, otherwise known as the "dynamical theory of heat".

The paper that spurred Clausius on in his quest to formulated laws on the relationship between heat and work was French physicist Sadi Carnot's 1824 publication "Reflections on the Motive Power of Fire". The sentence of Carnot's paper that caught the direct attention of Clausius is, in Clausius' own words, that: [2]

“Whenever work is done by heat (on a body in a cycle) no permanent change occurs in the condition of the working body [and that to deny this] would overthrow the whole theory of heat, of which it is the foundation.”

In this statement, in particular, according to Clausius, that a change does occur in the condition of the working body, Clausius saw his existence's work before him.

In his 1857 article “On the Nature of Heat Compared with Light and Sound”, Clausius compared heat, light, and sound to give a Boltzmann-Ebeling like description of the earth ecosystem based on metabolic needs, insulation, and chemical affinities. [12]

Kinetic theory
In 1857, Clausius published his "On the Nature of the Movement which we call Heat", in which, according to his own words independently of German chemist and physicist August Krönig, and his 1856 "A General Theory of Gases", developed a similar, but much more sophisticated version of the theory which included translational and contrary to Krönig also rotational and vibrational molecular motions. [6] In a followup 1858 paper, Clausius he introduced the concept of mean free path of a particle.

Education
Clausius’ early education was at a small private school, where his father was the principle. Following private schooling, Clausius moved on to the Gymnasium in Stettin. In 1840, at the age of 18, Clausius entered the University of Berlin in which he first entertained thoughts of a degree in history, but eventually settled on a degree in mathematics and physics, completed in 1844. He then spent a probationary year at the Frederic-Werder Gymnasium teaching advanced classes in mathematical physics.

Clausius completed his PhD dissertation in 1847 (or 1848), entitled On those Atmospheric Particles that Reflect Light (De iis Atmosphaere Particulis quibus lumen Reflectituri), under German mathematician and physical chemist Johann Schweigger, which proposed an explanation for the blue color of the sky, the red colors seen at sunrise and sunset, and the polarization of light, at the University of Halle (Martin-Luther-Universität Halle-Wittenberg). [5]

in 1850 was appointed professor of physics in the royal artillery and engineering school at Berlin. Late in the same year he delivered his inaugural lecture as Privatdocent in the university. [11]

American physicist Michael Guillen gives a fairly detailed biographical overview of Clausius in chapter "Unprofitably Experience" on the second law in his 1995 book Five Equations that Changed the World. [10]

In circa 1880, Clausius gave a talk on “On the Energy Supplies of Nature and the Utilization of them for the Benefit of Mankind” (published in book form in 1885), which, according to Spanish applied mathematics historian Jose Pacheco, was said to have inspired Austrian science teacher Eduard Sacher to write his 1881 book Outline of a Mechanics of Society. [8]

Quotes | On
The following are quotes on Clausius:

“Before Clausius, truth and error were in a confusing state of mixture, and wrong answers were confidently urged by the highest authorities.”

“The work of Clausius lies not on the shelves of libraries, but in the thoughts of men, and in the history of more than one science.”

“Clausius deduced his proof of the second law of thermodynamics from the hypothesis that: ‘heat will not pass spontaneously from a colder to a hotter body.’ This means not only that heat will not pass directly from a colder into a warmer body, but also that it is impossible to transmit, by any means, heat from a colder into a hotter body without there remaining in nature some change to serve as compensation. In my endeavor to clarify this point as fully as possible, I discovered a way to express this hypothesis in a form which I considered to be simpler and more convenient, namely: ‘the process of heat conduction cannot be completely reversed by any means.’ This expresses the same idea as the wording of Clausius, but without requiring an additional clarifying explanation. A process which in no manner can be completely reversed I called a ‘natural’ one. The term for it in universal use today, is: ‘Irreversible’.”