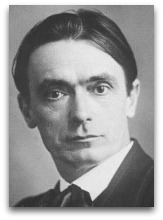 In existographies, Rudolf Steiner (1861-1925) (CR:14) was an Austrian philosopher noted for his writings on Goethe and his philosophy, particularly metamorphosis and metamorphology evolution theory, among other topics, such as Goethe's views on the secret principle of nature. [1]

Overview
In 1883, at age 21, Rudolf Steiner was chosen to edit Goethe's scientific writings for the principle Goethe edition of his time; it was Steiner's task to understand and comment on Goethe's scientific achievements. Steiner recognized the significance of Goethe's work with nature and his epistemology, and here began Steiner's own training in epistemology and insight into Goethe’s monistic view of nature. [4]

Some categorized Steiner among the early theorists to attempt relationship physics type theories of love. [2]

Machine | Organism
The following is Steiner’s 1883 position on the difference between a machine and an organism: [3]

“What is essential in the machine is only the interaction of its parts. The unifying principle that governs that interaction does not exist in the object itself but outside it as a plan in the head of its builder. Only the most extreme shortsightedness can deny that the difference between an organism and a mechanism is precisely the fact that in a machine the determining principle governing the interrelationship of its parts is external (and abstract), whereas in an organism it assumes a real existence in the object itself. Thus, the sense—perceptible conditions of an organism do not appear merely to follow one from another, but are governed by an inner principle that is imperceptible to the senses. In this sense this principle is no more perceptible to the senses than the plan in the builder's head, which is also present only to the mind. Essentially, it is such a plan, except that it has entered the organism's inner being and affects it directly, not through a third party, the builder.”

Issues
Of note, Steiner, to some, has accumulated a tarnished name, owing to his attempts to stitch together spirituality together with Goethe and science; some classifying his version of Goethean science (or spiritual science, as he seems to have labeled it) as pseudoscience. (Ѻ)
-
Quotes | By
The following are quotes by Steiner:
-

“Man becomes perfect when he lives as an Osiris. In this way, the Osiris myth receives its deeper significance. It becomes the example of a man who wishes to awaken the eternal within him.”