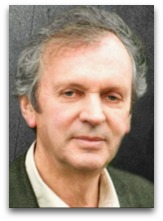 In existographies, Rupert Sheldrake (1942-) (CR:11) is an English biologist, biochemist, and natural scientist turned new age theorist, a Deepak Chopra comrade, noted in fringe science, for his 1981 theory of morphic fields (or morphogenetic fields), which he says are a new kind of biological-themed form-generating field, in addition to the gravitational, electrical, magnetic, and quantum fields, already recognized by physics, which, that explains peculiar “mental field” phenomena in the development and behavior of plants and animals, such as homing behavior, the sense of being stared at, hunted, or cheated on, etc., accelerated learning based on past cultural repetitions, seizure sense ability in dogs, earthquake sensing animals, among other similar parapsychology phenomenon, e.g. premonitions, many of which he has designed tests for with mostly semi-questionable but sometimes semi-curious results. [1]

Mental fields | Discussion
The bulk of Sheldrake's arguments are anecdotal, based on selections of personal interviews, while other finds are based on semi-scientific studies, which generate results near the neutral range of findings, give or take. While most seem to dismiss Sheldrake's work as quackery, he is, nevertheless, grappling with attempts to explain peculiar and semi-puzzling and yet completely explain phenomena, such as Ernst Mach's turning tendencies of people and animals, or the say "feeling" that something just isn't right, and so on; the fact that he avoids anchoring his theories in the gravito-electromagnetic field, seems to be his main detriment.

Quotes | About
The following are quotes about Sheldrake:

“A few last points, regarding physical evidence the human wave function, please see ch. 8 (Human Chemistry), where I derive the Schrodinger equation, in the context of human molecular orbital theory. The first crude types of human wave functions (turning tendencies) were drawn by Ernst Mach in 1885. There is a big difference, of course, between a wave function of an electron and a molecule, but both expressions are, however, derived starting with the Lagrangian. Regarding coherence and decoherence, this is a marginal topic in that very little has been said or understood on how this applies to human activity. The few examples of application include the questionable postulates of Rupert Sheldrake (e.g. pg. 273 of Sense of Being Stared At) or David Bohm, etc., e.g. twins who remain aware of each other when a tragic injury occurs. Most of these topics, however, are far removed from human thermodynamics, let alone entropy.”

Quotes | By
The following are example Sheldrake quotes:

“For more than 200 years, materialists have promised that science will eventually explain everything in terms of physics and chemistry. Science will prove that living organisms are complex machines, minds are nothing but brain activity, and nature is purposeless. Believers are sustained by the faith that scientific discoveries will justify their beliefs. Karl Popper called this ‘promissory materialism’ because it depends on issuing promissory notes for discoveries not yet made.”