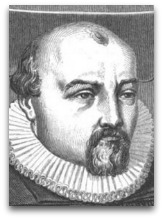 Name
Caus was a native of Normandy, and conjectured (Cust, 1900) to have been probably of the town of Caux, hence the name “Salomon of Caux”, or de Caus, Cauls. [3]

Overview
After a visit to Italy, Caus came to England as mathematical tutor to Henry, prince of Wales (1594-1612), the eldest son of James VI and I (1566-1625) (Cattell 1000:140), later employer of David Ramsay.
In 1612, Caus published a work entitled: “Perspective with the reason of shadows and mirrors” (“La Perspective avec la raison des ombres et Miroirs”), which he dedicated to the prince.

In 1614 to 1626, Caus worked as a hydraulic engineer and architect under Louis XIII and also in Germany, where he built a water-driven organ, a water-driven singing and flapping bird automaton, among other devices. (Ѻ)

In 1615, Caus, in his The Reason for Moving Forces, stated that there, historically, have been five main methods of elevating water above its level, which he recounts as follows: [2]

1. Siphon, which he says is older than Hero.
2. Operation by capillary attraction.
3. By the aid of fire.
4. Action of compressed air, as illustrated by Hero's fountain, and ascribed to Hero.
5. Animal labor applied to machinery, such as the screw of Archimedes, or the pump of Ctesibius.

Caus, in respect to method #3, says that there are many types of devices, and gives the following device as an example, which is similar to that made or diagrammed by Giovanni Porta (c.1601): 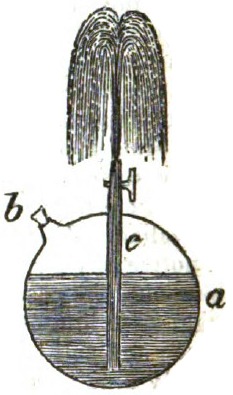 The operation is such that globe a is filled with water, which has a valve b attached, for adding water, and a tube c soldered into the upper part of the bulb, with a valve, the operation of which being such that, when fire is put under the globe, water shoots out of the tube c, like a fountain. In this work, Caus declared, supposedly, that steam, unique for this period of history, is evaporated water, and that upon cooling the vapor returns to its original condition. [1]
Other
In 1829, Francois Arago misattributed Caus, with his method #3 device, as being the inventor of the steam engine.

Education
Caus applied himself at an early age to the study of the mathematical sciences, his favorite writers being Archimedes, Euclid, and Vitruvius. [3]

Quotes | On
The following are quotes on Caus:

“Both Cardan and Porta were concerned with the phenomena of steam, but though they made some progress their results were seriously qualified by misconceptions of the nature of steam, which they still identified with air. Cardan in one obscure passage (1550) points out that a vacuum may be created by the condensation of steam; this suggestion, cogent as it would have been if clearly conceived, can hardly have had the significance that we might naturally be inclined to attribute to it. Porta's work on steam was rather more deliberate, and some of his experimental apparatus was highly suggestive. The attempt to measure the volume of steam by the amount of water displaced by steam pressure led him close to a positive distinction between steam and air, but he drew no decisive conclusions him-self. A late contemporary, Salomon de Caus, with essentially similar apparatus, took this decisive step. He declared that steam is evaporated water, and that upon cooling the vapor returns to its original condition. A similar experiment with mercury showed the same phenomena of evaporation and subsequent return to the liquid condition. De Caus was thus able to set down (1615) a series of propositions that represented a great advance upon all previous achievements in the field of gases and their phenomena. Air and steam were thus specifically distinguished and the practical conclusion was drawn that there were potentialities in steam pressure of much greater magnitude than were to be found in air pressure.”