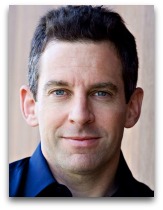 In hmolscience, Sam Harris (1967-) (CR:24) is an American pro-atheism (see: Jewish atheism) writer, characterized as one of the most “rational voices on the center left” (Ѻ), noted for his 2004 The End of Faith, which he began writing the day after 9/11, the vehemence of which initiated the so-called “new atheism” movement (see: atheism timeline). [1]

Morality
In 2010, Harris published The Moral Landscape, wherein he attempted to expand on utilitarianism, to argue that morality should be based on seeking the greatest amount of happiness among the total number of sentient beings, or something along these lines. [2]

Atheism
In atheism discussions, Harris is frequently cited as one of the main new atheists, along with Richard Dawkins, Christopher Hitchens, and Daniel Dennett, and or four horsemen of atheism.

Difficulties on theory
The difficulty with Harris is that the brand of atheism he is trying sell is "spiritual atheism", and thereby aiming to supplant one metaphysical belief with another, i.e. to supplant belief in God with belief in spirit; Eastern spirituality in particular admixtured with some type of drug-induced states of being logic. Harris cited this as objection #4 of his The End of Faith detractors: [5]

“The End of Faith is not a truly atheistic book. It is really a stalking horse for Buddhism, new-age mysticism, or some other form of irrationality.”

A second salient difficulty with his theory is that his "moral landscape" theory, while amenable, is baseless, in regards to foundational structure.

Book | Recommendations
In 2006, Harris, at the end of his Letter to a Christian Nation, listed ten atheism-themed books he recommends:

Harris, at SamHarris.org, lists (Ѻ) books he recommends by category.

Quotes
The following are employed and or relevant quotes:

“A belief is a lever that, once pulled, moves almost everything else in a person’s life. Are you a scientist? A liberal? A racist? These are merely species of belief in action. Your beliefs define your vision of the world; they dictate your behavior; they determine your emotional responses to other human beings.”

“Water is two parts hydrogen and one part oxygen. What if someone says: ‘Well, that's not how I choose to think about water.?’ All we can do is appeal to scientific values. And if he doesn't share those values, the conversation is over. If someone doesn't value evidence, what evidence are you going to provide to prove that they should value it? If someone doesn't value logic, what logical argument could you provide to show the importance of logic?”

“A puppet is free as long as he loves his strings.”

“Faith is the license religious people give themselves to keep believing when reasons fail.”