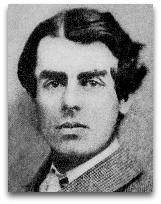 In science, Samuel Butler (1835-1902) was an English philosopher noted for his 1863 article-turned-book “Darwin Among the Machines”, wherein he picked up on the age-old automaton vs. life debate, albeit with a twist—to the effect that he argued for the possibility existence of a future evolved type of “machine life”, which might have a type of mechanical consciousness, that would evolve and outpace humans in evolution, such that the latter would become subservient to the former. The article touches on many modern origin of life stumbling blocks, such as the possibility of self-replicating machines. [1]

Erewhon
Butler's “Darwin Among the Machines”, along with two other articles published in The Press, eventually came to form “The Book of the Machines” to the opening section of his 1872 Gulliver’s travels stylized book Erewhon, wherein he wrote about how machines might develop consciousness by Darwinian selection. [2] Butler also, in Erewhon, describes the brain as being a machine-like homunculi: [3]

“What is a man’s eye but a machine for the little creature that sits behind in his brain to look through?”

The Butler human-disconnected evolving machine species model can be likened as a forerunner to the Terminator film series, in which computers overtake humans, becoming the dominating species. The general disproof of this theory is the notice that machines and computers are catalysts in the human chemical reaction, thereby only acting to lower the activation energy barrier, and hence not the free energy change of the reaction. The machines, in a sense, are a coupled secondary byproduct of the human chemical reaction, hence whence the primary reaction is terminated, if this were to the the case in the given scenario, the coupled product (machines/computers) would cease as well.

“Whether it is right to say that one believes in god and Christianity without intending what one knows the hearer intends one to intend depends on how much or how little the hearer can understand. Life is not an exact science, it is an art. Just as the contention, excellent so far as it goes, that each is to do what is right in his own eyes leads, when ridden to death, to anarchy and chaos, so the contention that everyone should be either self-effacing or truthful to the bitter end reduces life to an absurdity. If we seek real rather than technical truth, it is more true to be considerately untruthful within limits than to be inconsiderately truthful without them. What the limits are we generally know but cannot say.”