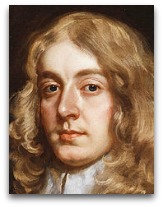 In existographies, Samuel Morland (1625-1695) (EP:12) (CR:5) was an English engineer noted for his prototype work on attempts and ideas for making an engine for raising water.

Overview
In 1660, Morland became a baronet, at which point he began to attempt to engineer different things; the following is a summary:

“Moreland received his appointment and a baronetcy in 1660, and immediately commenced making experiments, partly at his own expense and partly at the cost of the royal exchequer, which were usually not at all remunerative. He built hand fire-engines of various kinds, taking patents on them, which brought him as small profits as did his work for the king, and invented the speaking-trumpet, calculating machines, and a capstan. His house at Vauxhall was full of curious devices, the products of his own ingenuity.”

In 1683, Morland gave a booklet to the monarchy, which stated the following:

“Water being evaporated by fire, the vapors require a greater space, about 2000 times that occupied by the water. And rather than submit to imprisonment it will burst a piece of ordnance. But being controlled according to the laws of statics, and by science reduced to the measure of weight and balance, it bears its burden peaceably, like good horses, and thus may be of great use to mankind, especially for the raising of water, according to the following table, which indicates the number of pounds which may be raised six inches, 1,800 times an hour, by cylinders half-filled with water, and of the several diameters and depths of said cylinders.”

This project to Louis XIV was for raising water by means of steam, accompanying it with ingenious calculations and tables. [2]

“There is no exact description of the engine proposed by Morland, but the project is of the highest interest as one of the first to demonstrate the practical utility of steam-power. Morland's experiments must have been conducted with great care and skill, his estimate that at the temperature of boiling water steam was about two thousand times more bulky than water being substantially confirmed by Watt after careful investigation some hundred years later.”

Robert Thurston, of note, conjectured that this "Morland engine", described above, was a design Morland learned from Edward Somerset (1663). [4]

“We cannot say whether Samuel Morland employed a cylinder and piston in his apparatus above mentioned; we know that Hautefeuille did not. So far as our information goes, it is to Huygens that the merit belongs of having constructed the first motive engine consisting of a cylinder and piston. He employed gunpowder to produce a vacuum under the piston, and the atmospheric pressure performed the work.”

“Samuel Morland in the seventeenth century had envisaged the deployment of gunpowder engines in mines and for land drainage.”

Moreland’s designs, supposedly [?], did not employ a piston and cylinder. [3]

Quotes | On
The following are quotes on Morland:

“As we learn from a warrant of Charles II, Samuel Morland was, in 1661, granted a ‘monopoly’ for an engine for raising water out of mines by means of ‘air and powder conjointly’.”