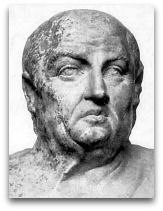 Quotes | On
The following are quotes on Seneca:

“Certainly he has sailed, not like Palinurus, but rather like Ulysses, or even better like Plato. This man, who is named Raphael — his family name is Hythloday— has no mean knowledge of the Latin language but is especially proficient in Greek; he has devoted himself to Greek more than to Latin because he has totally committed himself to philosophy and he knew that in that field there is nothing of any importance in Latin except some works of Seneca and Cicero. Out of a desire to see the world he left to his brothers his heritage in his homeland (he is from Portugal).”

Quotes | By
The following are noted quotes:
-

“The seeds together in this world of ours, must be confessed in other realms there are still other worlds, still other breeds of men, and other generations of the wild.”

“The afterlife is a very pleasant thing they promise us, but do not prove.”

“Religion is regarded by the common people as true, by the wise as false, and by the rulers as useful.”

“Fate leads the willing and drags the unwilling.”

“Death is a punishment to some, to some a gift, and to many a favor.”

“We all have the same birth, the same origin; there is no one who is nobler than another if it is not he who has a better mind and is more capable of virtue and liberal science. Nature bore us all parents allies when it generated us from the same nature and to the same end.”