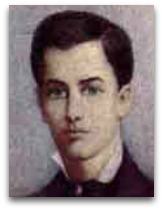 In existographies, Sergei Podolinsky (1850-1891) (CR:9), or “Serhii Podolynsky”, was a Ukrainian physician and socialist, noted in economic thermodynamics, for []
Overview
In 1881, Podolinsky, in an article, strove to reconcile the work-based theory of value with some type of proto "energy accounting" theory by integrating economic cycles with natural cycles, amid the skepticism of German political theorist Friedrich Engels who deemed it “totally impossible to try to express economic relationships in physical terms.” [2]

In 1883, Podolinsky, in his two-part article "Human Labor and the Unity of Nature", is said to have explicitly scrutinized the economic process from a thermodynamic perspective.

Engels discussed Podolinsky’s views on economics and thermodynamics with German political economist Karl Marx who both, supposedly, took great importance to the first law, but were either scantly receptive or hostile to the second law. In fact, when Engels was first confronted with Podolinsky’s efforts to reconcile Marxism with thermodynamics, Engels was “uninterested”, and choose to ignore the problem. [4]

“What Podolinsky has completely forgotten is that the working man is not only a fixer of present solar energy, but more than that, a squanderer of past solar heat. The degree wastage of energy reserves, coal, minerals, forests, etc., you know only too well, more than I do.”

Podolinsky was keenly aware that he was in line of succession to the Physiocrats and Carnot and Clausius, citing the former group’s emphasis on nature as the source of wealth, and the economic implications of the latter pair’s discoveries. Podolinsky tried to reconcile the labor theory of value with a thermodynamic analysis of the economic process. In his conclusions, which he communicated to Engels on several occasions, Podolinsky stated the socialist model was flawed because it assumed that scientific socialism would overcome all natural resource scarcities and enable unlimited material expansion. Podolinsky’s biophysical analysis led him to conclude that ultimate limits to economic growth lay not in the shackles of the relations of production, but in physical and ecological laws. [1]

Podolinsky is often grouped with biologist and urban planner Patrick Geddes and engineer and social reformer Josef Popper-Lynkeus who each were said to have tried to promote a biophysical view of economy as a subsystem embedded in a larger system subject to the laws of thermodynamics. [5]

Thermodynamics
In 1880, he resided in France, more or less in political exile, during which time, in April / May 1880 he published a text on "human work and its relation to the distribution of energy" in the journal Slovo (Word) in St . Petersburg. The article was then taken: June 1880 in France Socialist magazine (under the title "Socialism and the unity of physical forces"), also, a year later, in La Plebe in Italy and finally in 1885 in Die Neue Zeit, window German social democracy at the time of the anti-socialist laws. Podolynsky proposed, as an example, an energy balance of agricultural production and thus scored as a precursor of today's ecological economists. It also marks as Predrag Kuznetsov said in his introduction to the reedition Russian text, 111 years after its first publication, the beginning of thermodynamics creative process, thinking 'ectropique' (diction Felix Auerbach (1856 - 1933 Weltherrin Die Schatten und ihr, Jena, 1904)), so dear to Isabelle Stengers and Ilya Prigogine (New Alliance, Metamorphosis of Science, Paris, Gallimard, 1979).

Education
Podolynsky obtained a doctorate in medicine from the University of Wroclaw (Breslau) in 1876 (preparing his thesis, he undertook research on pancreatic enzymes at the Institute of Rudolf Heidenhain). Thereafter, among several texts that he signed an important treaty with Ukraine on the life and health of the people in Ukraine. Steam Engine, anonymous text, published in several languages, was also his pen. It is a utopian tale lies in the middle of the agrarian industry. [7]