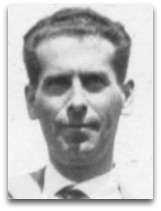 In hmolscience, Sergius Morgulis (1885-c.1965) was a Russian-American marine biologist noted for []

Overview
In circa 1937, Morgulis did the English translation of Alexander Oparin’s Origin of Life; in the 1952 second edition of which penned an “Introduction” with updated commentary on Harold Blum’s 1951 Time’s Arrow and Evolution, discussing an early version of auto-catalytic closure (see: perpetual motion of the living kind).

Reaction feedback | Model
In 1952, Morgulis, in his introduction to the second edition English translation of Alexander Oparin’s The Origin of Life, stated the origin of life problem thusly: [3]

“The [origin of life] problem is really quite insoluble since it is formulated upon a tacit assumption that the emergence of living from non-living could only have followed a hierarchical order, thus:

But life could have originated not as the end link of a chain of consecutive events but by simultaneous coordination of several factors: 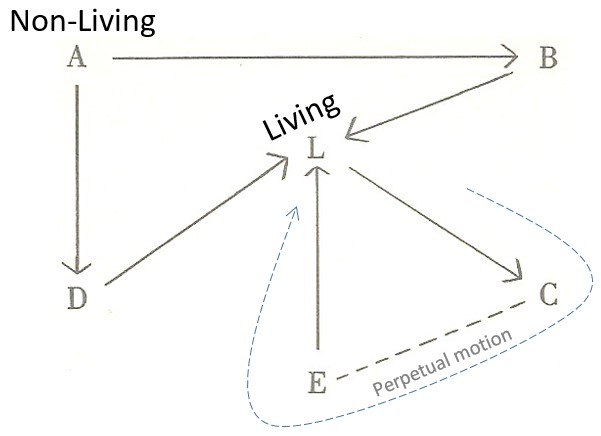 As long as the cell is considered as the unit of life, the origin of life must remain a paradox. But like the erstwhile atom in chemistry, the cell has lost its prestige as the ultimate unit in biology. The cell, like the ‘indivisible’ atom, is not recognized as highly organized and integrated system built up form extremely small and distinct particles.”

The “L → C → E → L” loop is what is called “chemical perpetual motion theory”, specifically the idea that reactant can feed back into the products to create an “auto-powered” or “self-powered” chemical reaction that goes perpetually on its own, thereby giving the perception of having found the so-called “spark day” (see: spark) of the origin of life. Secondly, the the discussion of how the cell breaks down into smaller components, we are reminded of the cell-as-molecule view of things.

“Oparin’s great contribution to the theory of the origin of life is that he postulated a long chemical evolution as a necessary preamble to the emergence of life, thinking of the evolutionary process as passing through three distinct chemical phases, from: inorganic chemistry, to organic chemistry, to biological chemistry.”

“An ability to metabolize, involving some system of catalysts is another fundamental property which cannot be conceived of except in conjunction with a mechanism for converting free energy, and we are deeply indebted to Blum and his Time’s Arrow and Evolution (1951) for his masterly analysis of this extremely important aspect of this subject.”

“Thermodynamically directed chemical evolution could conceivably proceed indefinitely without changing from a non-living [non-living state] to a living state. Only when organic matter had achieve a high degree of organization, and had acquired diverse propensities though concatenation of such substances—with ‘chance’ as the only arbiter—did primordial life emerge as a new dimension in nature: matter perpetuating its own organization.”