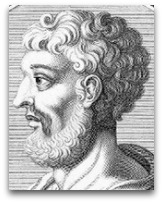 Overview
In c.200AD, Empiricus, in his section “Concerning the Gods”, of his Against the Physicists, summarized the main atheistic origin of god views of his time as follows: [1]

God theory: Gods were men of power, deified in memory after their deaths.

God theory: Gods were invented by lawgivers of ancient times as a kind of overseer of right and wrong actions of men, especially to prevent secret wrongdoings.

God theory: Gods were what the ancients invented to equate the sun, rivers, and other beneficial things with.

God theory: Gods existed, but not where the “real nature of things” is at issue.

In 1562, the works of Empiricus were published for the first time, in post dark age era, therein fostering the Renaissance. By 1569, all of his works were in print and being reprinted.

Quotes | Employed
The following are quotes employed by Sextus:

“All things, including animals and plants, are rational.”

“That god does not exist is the contention of those who are nicknamed ‘atheists’, such as: Euhemerus …, Diagoras of Melos, Prodicus of Ceos, and Theodorus, and multitudinous others.”

“Critias seems to be from the ranks of the atheists when he says that the lawgivers of ancient times invented god as a kind of overseer of the right and wrong actions of men. Their purpose was to prevent anyone from wronging his neighbors secretly, as he would incur the risk of vengeance at the hands of the gods.”

“Since justice too was introduced according to the relationship of men to each other and to the gods, if there are no gods, justice too will not exist. And this is absurd. So the followers of Pythagoras and Empedocles and the rest of the Italian group say that we have a kind of communion not only with each other and the gods but also with irrational animals. For there is one spirit penetrating the entire cosmos, like a soul, which also unites us with them.”