, in Heliopolis cosmology (see: Heliopolis creation myth), was the Egyptian god of the air; male counterpart of the goddess Tefnut (moisture), father to Geb and Nut, who conceptually "held up" the heavens from the earth, i.e. "separated" his incest-desiring children from copulation; who, in Greek mythology, became the mold behind the character of Atlas; who, in Hebrew mythology (see: Hebrew recension), became, via god character rescript, the character Joshua, described as the pre-exodus born son of Nun who became the prophet successor to Moses. [1]

Greek mythology | Atlas
In Greek mythology, the god Shu, via Homer (c.800BC), Hesiod (c.800BC), and Virgil (30BC), became, in slightly re-written fashion, the Greek god Atlas who with his brother Menoetius sided with the Titans in their war against the Olympians, the Titanomachy. When the Titans were defeated, many of them (including Menoetius) were confined to Tartarus, but Zeus condemned Atlas to stand at the western edge of Gaia (the Earth), according to the Virgil (30BC) version, and hold up the “sky” (or Nut, in original Egyptian version) on his shoulders, to prevent the two from resuming their primordial embrace. (Ѻ)

A common misconception, to note, is that Atlas, in modern times, is oft-depicted as being forced to hold the “earth”, not the heavens, on his shoulders, but classical art shows Atlas holding the celestial spheres, not a globe; the solidity of the marble globe borne by the renowned Farnese Atlas may have aided the conflation, reinforced in the 16th century by the developing usage of atlas to describe a corpus of terrestrial maps.

Below left (Ѻ) is an c.550BC image, form a laconic bowl, showing Atlas, Typhoëus (Typhon), and Prometheus, the three heads of the insurgency, shown while they are being punished: 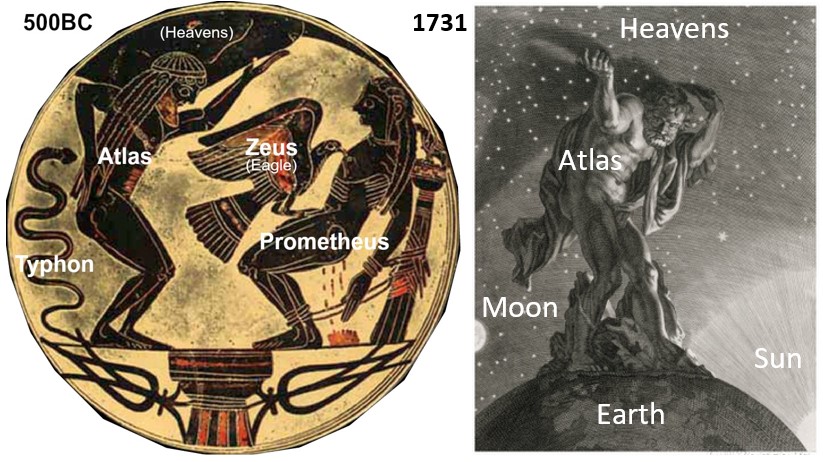 The image, above right, is a 1731 engraving (Ѻ), by Bernard Picart, of Atlas supporting the heavens:

Hebrew mythology | Joseph
In Judaism, “god Shu” became transliterated into the Biblical character of “Jo- + Shu” or Joshua; a famous example of which is found in Joshua 10:13, wherein Joshua (or god Shu) tells the sun (god Ra) and the moon (god Thoth) to stand still for an entire day.

Hence, the "Sorrows of Isis", as Vladimir Golenischeff (1877) and Wallis Budge (1904) entitle the above tale, became the "Book of Joshua" (Book of Shu), or Joshua chapter of the Bible, according to which, Joshua made (or bade) both the sun and the moon to stand still. Nearly the entire Old Testament and New Testament were written in the manner.