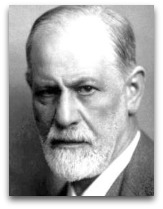 Freud privately admitted remote intellectual connections with Immanuel Kant, Voltaire, and Ludwig Feuerbach; he also acknowledged that Arthur Schopenhauer's "will" (see: Schopenhauerian will) was the same as his "unconscious desire". [8]

“Neither in my private life nor in my writings have I ever made a secret of being an out-and-out unbeliever.”

In 1927, Freud, in his The Future of an Illusion, does his Cicero-style On the Nature of the Gods dialogue, albeit in the guise of Schopenhauer’s Dialogue on Religion, wherein he debates with a Demopheles character, representative of “the people”, on the subject of whether people need religion; the penultimate chapter reads as follows: [9]

“Have you learned nothing from history? Recall how short lived and miserably ineffectual the experience of the French revolution and Robespierre was. Furthermore, the same experiment is being repeated in Russia at the present time, and we need not feel curious as to its outcome. Isn’t it obvious people need religion?”

“The idea forces itself upon him that religion is comparable to a childhood neurosis, and he is optimistic enough to suppose that mankind will surmount this neurotic phase.”

Freud, of note, has his reality character espouse, in his “education to reality” process, as he calls it, the conclusion that they will have to admit their “helplessness” and “insignificance” in the “machinery of the universe”. This would seem to put Freud into the dumb atheism (or incorrect atheism), ignorant atheism, or pessimistic atheism category, to some extent.

Overview
Freud never fully published his thermodynamic interpretation of psychology, but only integrated aspects of his theory throughout his various articles and booklets.

Some of Freud's thermodynamic ideas are said to show through in his 1920 Beyond the Pleasure Principle.

His best known work that presents his theory is the 1923 The Ego and the Id, wherein he presents the argument that the psyche is an energy that exists in different states at any point in time.

In 1930, Freud, in his Civilization and its Discontents, stated that the starting point for his famous 1895 conceived free energy and bound energy connected 1910 "drive theory" basis for his libido energy (id, ego, superego) model of the "theory of instincts" of psychoanalysis from the final line of Schiller's 1795 poem, which according to the 1961 translation by James Strachey, Freud quotes as follows:

The twenty-seven quotations from Schiller in Freud's work, as identified in the Concordance, attest to his intimate knowledge of the writer. [5]
In 2007, American-Canadian literature scholar Karyn Ball argued the following: [4]

“It is as if Freud’s key scientific references seem to cull their major hypotheses from Goethe’s Elective Affinities (1809), which, along with Schiller, Schopenhauer, and Plato, would have also served as the literary and philosophical source of inspiration for the metaphysical theses in Beyond the Pleasure Principle.”

Freud, however, did state that he was inspired to go to medical school after reading of one of Goethe’s poems.

Freud is said to have derived his “death instinct” theory, as described in his 1920 Beyond the Pleasure Principle, from a combination of thermodynamics and chemistry, i.e. that combination and dissolution of elements into aggregate substances are balancing processes. In his own words: [3]

“Starting from speculations on the beginning of life and from biological parallels, I drew the conclusion that, besides the instinct to preserve living substance and to join into ever larger units, there must exist another, contrary instinct to seek to dissolve those units and to bring them back to their primeval, inorganic state. That is to say, as well as Eros there was an instinct of death. The phenomena of life could be explained from the concurrent or mutually opposing action of these two instincts.”

The origin of Freud's mental dynamic theories came from his interactions at medical school. Freud started medical school in 1873 at the University of Vienna. His first-year adviser was German physiologist Ernst Brücke, director of the director of the Physiology Laboratory at the University, close friend and previous medical school lab partner to none other than German physicist Hermann von Helmholtz one of main founders of thermodynamics and one of the three-main formulators of the first law of thermodynamics (conservation of energy). Over the next six years, initially concentrating on biology, Freud did research under Brücke.

In 1874, being influenced by the thermodynamic theories of Helmholtz, Brücke published Lectures on Physiology, which supposed that all living organisms are energy-systems governed by the first law of thermodynamics, which states, in effect, that the total amount of energy in any given physical system is always constant, that energy quanta can be changed but not annihilated, and consequently that when energy is moved from one part of the system it must reappear in another part. Freud, in turn, viewed these movements of energy to occur within the different levels of the consciousness. [2]

In sum, in his Lectures on Physiology, Brücke set forth the radical view that the living organism is a dynamic system to which the laws of chemistry and physics apply. This was the starting point for Freud's dynamic psychology of the mind and its relation to the unconscious. [1] In other words, Freud, who had great admiration and respect for Brücke, quickly adopted this new 'dynamic physiology' with enthusiasm. From there it was but a short conceptual step - but one which Freud was the first to take, and on which his claim to fame is largely grounded - to the view that there is such a thing as psychic energy, that the human personality is also an energy-system, and that it is the function of psychology to investigate the modifications, transmissions, and conversions of 'psychic energy' within the personality which shape and determine it. This latter conception is the very cornerstone of Freud's psychoanalytic theory. [2]

Although a number of psychologists, in the late 19th century, professed views on the correlation between the first law of thermodynamics (energy conservation) and the energy associated with mental thoughts, Freud did the most to translate this linkage into a workable framework of logic, namely by supposing that innate drives that didn't immediately find action were "repressed" in the subconscious, an energy that found exit in other ways.

Religio-mythology | Moses
In 1937, Freud, written in exile (Ѻ) in England, penned the first two parts on Moses and monotheism, published in Imago, which, together with a third unpublished section, were compiled into the 1939 book Moses and Monotheism, the gist assertion of which, building on the earlier work of Eduard Meyer (1905), Hugo Gressmann (1913), and Ernst Sellin (1922), being that Moses, if he existed, was an Egyptian associated with the Akhenaten religious movement and that the three main names of god, in the Hebrew Bible, El aside, namely: Adonai, Yahweh, and Jehovah, “Adon-ai”, in particular, are “Aten” derivatives. [7]

Moyer | Martha Bernays adumbration
In 2010, American psychologist Dale Moyer published a “fictional” book entitled The Flash and Outbreak of a Fiery Mind, which is easily mistaken as a Sigmund Freud and Martha Bernays correspondences collected works set, which it is not, but rather it is a book that contains 192 “fictional” love letters that Moyer wrote “on Martha's behalf” starting when Martha is 21 years old and end with her marriage to Sigmund at age 25. The fictional book contain 55+ page mentions Goethe, five mentions of Goethe’s Elective Affinities, and a rather telling account of Martha and her younger sister Mann Bernays visit to Weimer and their tour of the Schiller and Goethe cites and places. [6]

“I feel that I have done for human ‘reason’, what Copernicus did for the ‘universe’, and Darwin did for our ‘origins’.”

“Religion is a neurosis of mankind. Its grandiose powers [are but the result of] a neurotic obsession in individuals.”