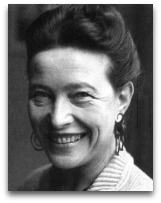 Atheism
Beauvoir, reports in her autobiography, that she stopped believing in god at age fourteen. Sometime thereabouts, she caught her mother giving direction to her confessor, and began to see the whole thing as a sham. Then she started noticing the hypocrisy of her own father and others. The final stroke, she reports, was reading a work of Honore Balzac's literature forbidden by the church, wherein, she found it, and through it the world, so fantastic and beautiful that she could only come to feel angry with the organization that would try to take it from her. [2]

Quotes
The following are noted quotes

“God is a name for nothing more than a cover of a mirage.”

“When a god falls, he does not become merely a man; be becomes a fraud.”

“I had always thought that the world was a small price to pay for eternity; but it was worth more than that, because I loved the world, and it was suddenly God whose price was small: from now on His name would have to be a cover for nothing more than a mirage.”