In engines, Smeaton engine, was an improved Newcomen engine, built, in various stages of development, by John Smeaton, from 1769 to 1783. [1]

Overview
In 1769, John Smeaton took a Newcomen engine design and improved it, with more precise cylinder boring, better proportioning of parts, and by way of testing various cylinder sizes for optimal horsepower ratings, which he detailed in published tables.
The following is an 1772 Smeaton engine: [3] 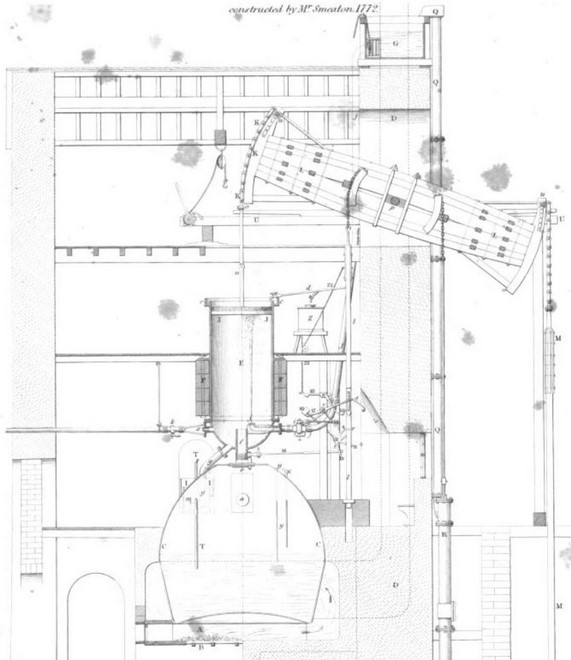 “Smeaton built a number of Newcomen engines at the Carron ironworks in Scotland and greatly increased their mechanical efficiency by more precise cylinder boring, a better proportioning of parts, and general improvement in shopwork. He attained, it is said, the highest performance of which this type of engine was capable in practice. One of his largest engines went to Russia in 1775 to pump out Catherine II's dry docks at Kronstadt. It replaced two enormous windmills, 100 feet high, which Dutch engineers had installed in 1719. It was said that these mills had required a year for the task; the Newcomen engine built by Smeaton did the job in about two weeks.”

“Smeaton took the Newcomen design and improved it. His first pumping engine was for the New River Company in Islington, London, where Robert Mylne was engineer. Smeaton designed a beam engine that replaced their horse-driven pumps in 1769. However, the results were disappointingly inefficient and he was determined to do better. He amassed data from 15 working engines in the Newcastle area and 12 in Cornwall, expressing the results in terms of their power and efficiency. He built an experimental engine at Austhorpe in 1770 and began rigorous testing. It had a 250mm (10in) diameter cylinder and developed a little over 0.75kW (1hp). Over the course of some 130 tests, Smeaton altered factors and observed differences, gradually improving performance. After two years' work he drew up a comprehensive table of properties for engines with cylinders of 0.25-1.83m (10-72in) diameters. He designed 13 engines altogether, four of them returning engines with waterwheels. Then in 1772, Smeaton received a request to design a pumping engine for Long Benton colliery in Northumberland. He suggested one with a 1.32m (52in) diameter cylinder. It began operating in February 1774, and tests in May showed that it developed about 30kW (40hp) — a 25 percent increase on the most efficient steam engine in the country to date.”