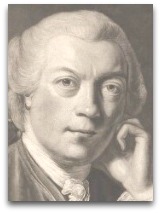 In existographies, Soame Jenyns (1704-1787) was an English writer, philosopher, and politician, noted for []

Quotes | By
The following are quotes by Jenyns:

“I am persuaded that there is something in the abstract nature of pain conducive to pleasure; that the sufferings of individuals are absolutely necessary to universal happiness.”


“There are numberless imperfections inherent in all human governments, and these are imputable only to the inferiority of man’s station in the universe, which necessarily exposes him to natural and moral evils, and must, for the same reason, to political and religious; which are indeed but the consequences of the other.”


“Animal life rises from this low beginning in the shellfish, through innumerable species of insects, fishes, birds, and beasts, to the confines of reason, where, in the dog, the monkey, and chimpanzee, it unites so closely with the lowest degree of that quality in man, that they cannot easily be distinguished from each other. From this lowest degree in the brutal Hottentot, reason, with the assistance of learning and science, advances, through the various stages of human understanding, which rise above each other, until in a Bacon, or a Newton, it attains the summit. Here we must stop, being unable to pursue the progress of this astonishing chain beyond the limits of this terrestrial globe, with the naked eye; but through the perspective of analogy, and conjecture, we may perceive that it ascends a great deal higher, to the inhabitants of other planets.”