In human physics, sociophysics, a near synonym to "social physics", is the study of social phenomena from a physics perspective, often using the human atom, social atom, or human particle perspective. The subject seems to deal with thermodynamics in part; albeit, the majority of theories in this field seem to be on statistical extrapolations or phase transition models.

Recent | Interest
The following histograms show the number of papers with the word “society” or “social” appearing in the title or abstract of papers published in the American Physical Society (AIP) and in physics papers section of the preprint archive (arXiv) since 1995, according to Indian sociophysicists Sen Parongama and Bikas Chakrabarti (2013): [17] 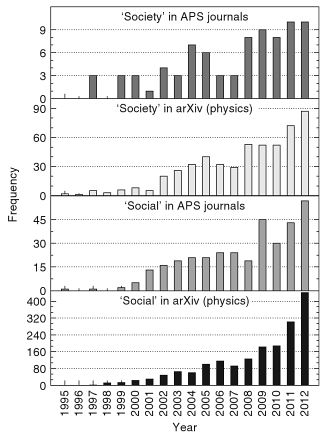 Social physics
The term "sociophysics", in the historical "big picture" context, such as chronologically summarized on the HP pioneers page, seems to be put a late 20th century upgrade to the older 19th century “social physics” of thinkers including: Henri de Saint-Simon (1817), Adolphe Quetelet (1835), Auguste Comte (1842), and Henry Carey (1858), who were all viewing people as atoms or in some cases, such as with Carey, atoms or molecules, depending.

The 2009 book Sociology Theory in Classical Era specifically defines Comte as the “father of social physics”. [7]

Sociophysics | Coining
In circa 1950, American astrophysicist and engineer John Q. Stewart, with grant funding from the Rockefeller Foundation, launched the Princeton University Department of Social Physics; though, at this point, Stewart vacillated between "social mechanics" and "social physics".

In 1974, American physicist Arthur Iberall, in his Bridges in Science: from Physics to Social Science, stated the following: [12]

“It is the possible development of theory (e.g., kinetic theory or sociophysics) and practice (e.g., social engineering) that may be useful for men.”

In the 1970s, French physicist Serge Galam claims to have begun working in the field of sociophysics, as a "hobby" along side of this regular physics duties. In his 2012 talk “Celebrating Thirty Years of Sociophysics: Can It Become a Predictive Tool?”, Galam states that sociophysics "initiated in 1982”, though this seems to be in relation to his own work. [11]

In 2004, Galem commented on the resistance he has faced in working to bridge or meld physics and sociology over the last last few decades: [1]

“To suggest that humans could behave like atoms was looked upon as a blasphemy to both hard science and human complexity, a total nonsense, something to be condemned. And it has been indeed condemned during the last fifteen years.”

In 1993, Canadian political scientist Paris Arnopoulos and his 1993 book Sociophysics, in which he speculates on heat, pressure, temperature, entropy, and volumes of societies. [3]

In 2012, Galam published his first Sociophysics book, the abstract of which is as follows: [6]

Do humans behave much like atoms? Sociophysics, which uses tools and concepts from the physics of disordered matter to describe some aspects of social and political behavior, answers in the affirmative. But advocating the use of models from the physical sciences to understand human behavior could be perceived as tantamount to dismissing the existence of human free will and also enabling those seeking manipulative skills.

This thought-provoking book argues it is just the contrary. Indeed, future developments and evaluation will either show sociophysics to be inadequate, thus supporting the hypothesis that people can primarily be considered to be free agents, or valid, thus opening the path to a radically different vision of society and personal responsibility. This book attempts to explain why and how humans behave much like atoms, at least in some aspects of their collective lives, and then proposes how this knowledge can serve as a unique key to a dramatic leap forwards in achieving more social freedom in the real world. At heart, sociophysics and this book are about better comprehending the richness and potential of our social interaction, and so distancing ourselves from inanimate atoms.

Here we see Galem outlining a social atom or human atom approach to the application of physics to sociology; and in his "but" comment, see a defensiveness commonly seen in regard to the amount of "attack" one will experience whenever socio-physics, socio-chemistry, or socio-thermodynamics formulation is attempted (see: objection to), which is odd being that France is the most non-religious country in regards to belief systems.

In 2016, Slovenian (Ѻ) biotechnology researcher Bojan Keevill (Ѻ), in his “Sociophysics: the Last Science”, after believing that he had coined the term "sociophysics", but finding that he had not, blogged a decent historical overview of sociophysics. (Ѻ)

Galem-Stauffer | Paternity tensions
In 2000, at an international conference on “Economic Dynamics from the Physicist’s Point of View” at Bad-Honnef, Germany, Galam was drinking a beer with American Eugene Stanley, coiner the term “econophysics” (1995), who had knew Galam since the 1970s; during which time Stanley commented that Galam was indeed the “father of sociophysics”.

In 2003, however, German physicist Dietrich Stauffer gave a talk in Poland on sociophysics, during which Galam’s contributions were totally ignored. This “pissed off” Galem, as he says in his 2012 Sociophysics book section 3.12 Claiming the Paternity of Sociophysics, after which he wrote his frank article “Sociophysics: a Personal Testimony”, in which he provided details about his claim to paternity of sociophysics, over that of other supposed originators of sociophysics, such as Thomas Schelling. [6]

Polish physicist Krzysztof Kulakowski, in his 2007 chapter “Around the Gap between Sociophysics and Sociology”, defines Galem as “one of the leading authors in sociophysics”. [4]

“Sociophysics uses some methods and concepts coming from physics to describe certain social and political behaviors. Galam’s sociophysics study the existing knowledge thanks to methods borrowed from statistical physics. Because sociophysics compares the behavior of people with the behavior of atomic particles, it is not an exact science.”