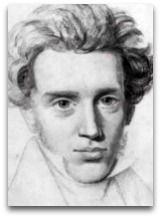 Existentialism
Kierkegaard is oft-classificated as one of the four main existentialism philosophy founders, along with: French philosopher Jean-Paul Sartre, Russian writer Fyodor Dostoyevsky, and German thinker Friedrich Nietzsche; per his absurdism discussions, he would seem to classify more with Sartre, than Dostoyevsky and Nietzsche.

Fear and Trembling
In 1843, Kierkegaard, in his Fear and Trembling, gives an intellectually backwards (religio-mythology scholars had already debunked Abraham as myth, by this period) take on the Abraham and Isaac story, in respect to his own issues with doubt in god, but that he wanted to believe in faith, for happiness sake; the discussion is weak and messy, e.g. “I am convinced that god is love”, “I cannot close my eyes and hurl myself trustingly into the absurd” (see: absurdism), etc. [7]

Crowd is Untruth
In 1846, Kierkegaard, in his “The Crowd is Untruth” (Ѻ), seems to ramble on incoherently, per reason that Jesus as myth (see: Christ myth theory) had been popularized by this period, about Jesus being crucified vs “crowd”, which he says has “power, influence, reputation, and domination”.

“There are two kinds of geniuses. The characteristic of the one is roaring, but the lightning is meagre and rarely strikes; the other kind is characterized by reflection by which it constrains itself or restrains the roaring. But the lightning is all the more intense; with the speed and sureness of lightning it hits the selected particular points—and is fatal.”

“Geniuses are like thunderstorms. They go against the wind, terrify people, cleanse the air.”

Other
In the 1830s, Kierkegaard, among genius and exercise aficionados, took what he referred to as a “people bath” each day walking around his native streets, chewing over ideas; in his own words: [3]

“I have walked myself into my best thoughts.”

Influence
Friedrich Nietzsche, supposedly, was impressed by Kierkegaard and Martin Heidegger, supposedly, rediscovered Kierkegaard turning him into an intellectual predecessor of existentialist philosophy. [5]

Kierkegaard was also influential to Samuel Beckett and Walker Percy.

Tributes:
The following are noted tributes:

“Among men of flesh and bone there have been typical examples of those who possess this tragic sense of life. I recall now Marcus Aurelius, St. Augustine, Pascal, Rousseau, Rene, Obermann, Thomson, Leopardi, Vigny, Lenau, Kleist, Amiel, Quental, Kierkegaard—men burdened with wisdom rather than with knowledge.”

“I feel as if I were a piece in a game of chess, when my opponent says of it: That piece cannot be moved.”


“Like Leporello, learned men keep a list, but the point is what they lack; while Don Juan seduces girls and enjoys himself—Leporello notes down the time, the place and the description of the girl.”

“Life can only be understood backwards; but it must be lived forwards.”

“An unconscious relationship is more powerful than a conscious one.”