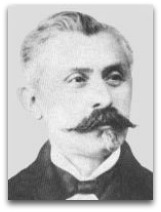 In hmolscience, Spiru Haret (1851-1912) was Romanian mathematical physicist noted, in human physics, for his 1910 Social Mechanics, a variant of social mechanics, wherein he explicitly rejected metaphysical reasoning in favor of mechanics based study of social phenomena.

Social mechanics
In 1907, a peasants’ rising took place in Romania, to which Haret took notice. The event, in some way, according to Romanian sociology historian Ovidiu Badiaa, was a goad or driving force behind the writing of his 1910 Social Mechanics; about which he said the following: [3]

“We may hope that someday safe methods could be provided to help the solving of many problems which today are often doomed to the inspiration of the moment, or the happening or inclinations.”

In his Social Mechanics, Haret outlined a mathematical-based formulation of social mechanics, in which he used mathematics and Newtonian mechanics to explain social behavior, in terms of Cartesian coordinates of moving points and velocities. [1] One concept developed by Haret is that of ‘social space’, as critiqued harshly by Werner Stark. [2]

Education
Haret competed a degree in physics and mathematics at the University of Bucharest in 1874. He received a mathematics diploma in 1875 and a physics diploma in 1876 at Sorbonne and in 1878 completed his PhD with a thesis on On the invariability of the major axis of planetary orbits.

“It may be mechanical sociology if it treats of the science of sociology after the mechanical method; and it is also social mechanics if you write a book in which you point to the ways and means of applying mechanics to sociology—I did the latter.”

“In our study there cannot be any other metaphysical reasonings. Even in those deeds in which man’s will seem to be forcely exerted, phenomena are subjected to fixed laws independent of man.”

“The social diffusion is a complex phenomena and we are doubtful that the plain empiric law of gas diffusion would suffice to explain it. In physics the only elements one has to take into consideration are the densities and, sometimes, the chemical compositions of gases placed in contact with one another. In sociology, the phenomenon is much more complicated. However, the discovery of certain laws of social diffusion which seem difficult is not impossible.”