In genius studies, stand up study, or stand up reading and writing method, similar to peripatetic dialogue, refers to the method or reading and or writing, used by many geniuses and literary scholars, according to which writing, reading, and studying is done standing up, e.g. at a naval-height counter top, a specially-designed table, or, if need be, to improvise, a chair placed on a standard diner table.

Intermittent to stand-up-study (reading and or writing), one is also advised to employ the "exercise processing method" to facilitate the "thinking" portion of information assimilation and processing, namely: use walking, running, biking, or some other form of aerobic exercise, to actuate and speed the mechanism of problem solving and new idea formation. Einstein has said that most of his best ideas were thought up on the bicycle. Dirac has said that he used to take long walks around the city to ruminate on his ideas. Turing ran very-intensely to "get it out of my mind" as he said.

Aristotle
Little is known about how Aristotle wrote his prodigious Collected Works, amounting to the most established “theories of everything” ever penned, but it is known that Aristotle, shown below above middle right, had the habit of walking about while he talked: 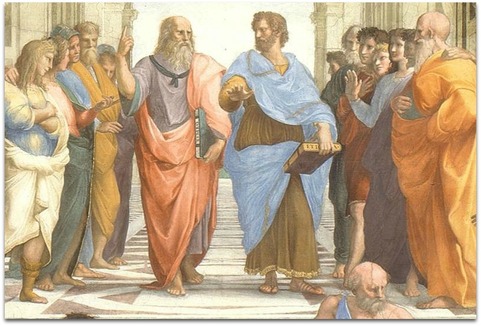 His followers, called Peripatetics, are said to take their name from the word peripatêtikos, meaning “given to walking about”) or because he held lessons beneath the colonnades (or peripatoi) of the Lyceum. [1]

Newton
English physicist Isaac Newton wrote his entire Principia: Mathematical Principles of Natural Philosophy, during the years mid 1686 to 28 Apr 1686, in which he proved by geometry, the mode of universal gravitation, namely that if a body Q orbits in an ellipse, the implied force toward the focus S (not the center C) varies inversely with the square of distance, as diagrammed adjacent, while standing; as summarized by James Gleick: [2]

“The alchemical furnaces went cold; the theological manuscripts were shelved. A fever possessed him, like non since the plague years. He ate mainly in his room, a few bites standing up. He wrote standing at his desk. When he did venture outside, he would seem lost, walking erratically, turn and stop for no apparent reason, and disappear inside once again. Thousands of sheets of manuscript lay all around, here and at Woolsthorpe, ink fading on parchment, the jots and scribbles of four decades, undated and disorganized. He had never written like this: with a great purpose, and meaning his words to be read.”

Goethe
German polyintellect Johann Goethe was known to using a stand up writing desk, such as the one shown at his house below in Wiemar, Germany: [5]

“Writing and travel broaden your ass if not your mind and I like to write standing up.”

which he did by perching his typewriter on a chest-high shelf, while his desk became obscured by books. [3]

Thims
In 1990, Libb Thims, at the age of 19, having never owned a book before, began to engage in his Faustian quest for knowledge, the first step of which being to take courses as Washtenaw Community College and Eastern Michigan University, simultaneously, and to study intensely with the aim to master every subject. The first attempts in this direction were done using the standard method of opening a book, siting at a table, and reading, such as shown below left. At a certain point, in the course of this effort, when the period of the "finals" was at hand, and pressure was on, Thims found himself short on sleep, and attempting to study past midnight, and somewhere between 1AM and 3AM, began to nod off, and even with the help of caffeine, was beginning to lose alertness, at which point, in an act of aggressiveness, mixed with anger, at really wanting to succeed, stood up, picked the chair up, and placed it on the table, such as shown below (middle), placed the book on the chair, and began to wake up and continue studying in a more alert and wakeful manner. This sustained effort eventually paid off when Thims got accepted to three of the four engineering schools he applied for, namely: UCLA, University of Michigan, University of Berkeley, California, but not Stanford (as an essay was required, which was not good). While Thims had desired to attend Berkeley, as this was one of the top-ranked chemical engineering schools, at the time, in the country, he decided to stay in his home town and attend the University of Michigan, for financial reasons. During the course of completing two engineering degrees at the University of Michigan, the chair on table study method evolved into the raised folding table method as shown below (right), wherein books were placed under the legs of the table, so that the table was raised to bell button height: 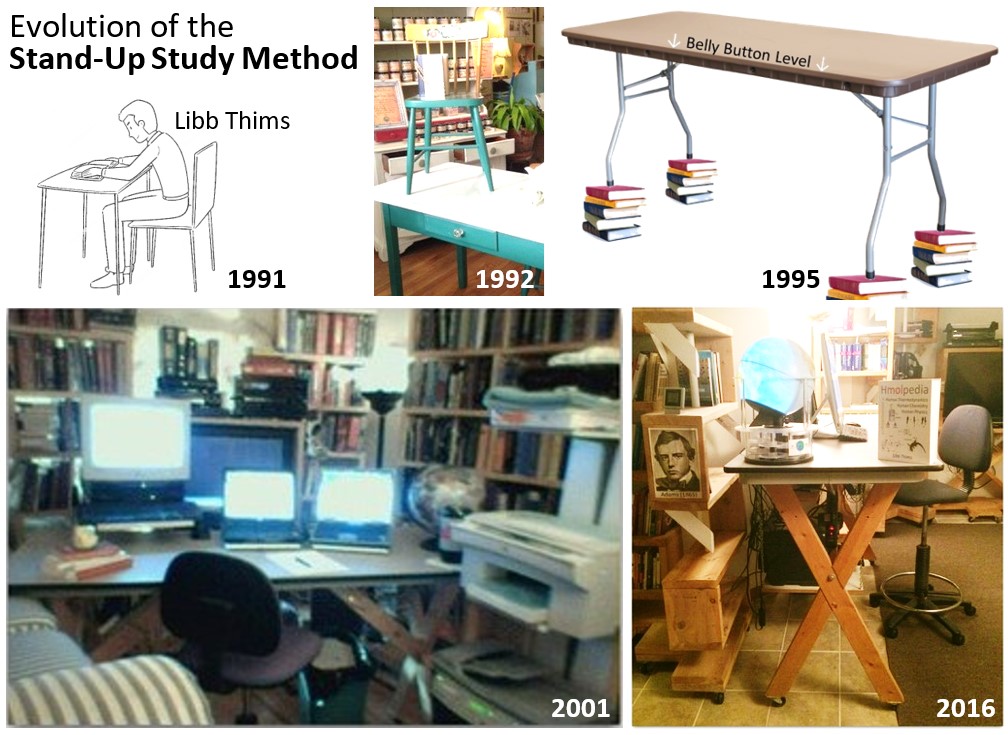 In 2001, after moving to Chicago, Thims removed the folding legs and built wooden legs for the table, with 2-inch caster wheels affixed to each of the four legs of the table, so that the table could be moved around as needed, as shown above (left). At this point, Thims also had three to four computers affixed to the table on swivel arms, so that the computers hovered over the table and could be moved around and re-positioned as needed. In the 2000s, with the advent of large flat touchscreen computers, such as the HP Envy 27-inch computer shown above (right), able to functionally display 80+ webpages, plus multiple word files and computer programs, simultaneously, Thims switched to multiple laptops to one main frame computer. The table is replete with hanging printer, hanging trashcan, art/architecture supply store drafting chair, which Thims uses about 20% of the time, when studying, writing, or reading (80% of the time he stands), and illuminated globe.
Quotes
The following are related quotes:

“When I visited the house of German writer and artist, Johann Wolfgang von Goethe (the oft-called 'last universal genius') in Weimar many years ago, I was taken by his original writing desk [above]. To stand before the great writer's creative space thrilled me. I was quite literally standing in the spot he wrote his great works; you see, he wrote while standing up. His desk was tall, five feet high and on a slant like a podium. Since then I've discovered other genii who also wrote whilst on their feet. Sir Isaac Newton wrote hisentire Mathematical Principles of Natural Philosophy standing up. Ernest Hemingway also wrote standing at a chest height desk on which he'd placed his typewriter.He once said,‘writing and travel broaden your ass, if not your mind, and I like to write standing up.’ German philosopher Friedrich Nietzsche, and American electrochemical engineer Libb Thims also wrote standing up. Even Aristotle is credited with walking about while talking and thinking. So, with so many great thinkers to vouch for the benefits of standing up to write, a while ago I purchased a standing desk for myself. You can see in the photo [right] I'm writing at it now.”