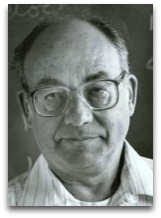 In science, Stanley Miller (1830-2007) was an American chemist noted for his now-famous 1952 Miller-Urey experiment, a reenactment, so-to-say, of Darwin’s 1871 warm pond model hypothesis of an origin of life theory, wherein using electrical discharge device he synthesized amino acids, the components of proteins, from water and other early earth like inorganic chemicals; a step above, so to say, Friedrich Wohler’s also-famous 1928 synthesis of “organic” urea from “inorganic” ammonium cyanate; both acting to dissolve the conceptual divide on the apparent difficulties of the theory of abiogenesis. [1]

Education
Miller, an avid reader, known as a “chem wiz” in high school, graduated from the University of California, Berkeley in 1951, with a BS in chemistry, after which he the University of Chicago to get a graduate degree in chemistry, during which time he became interested in the stellar synthesis of the elements work of Edward Teller, spending six months investigating the subject. [2]

During his first semester in the fall of 1951, Stanley went to a seminar in which the Harold Urey presented his ideas, supposedly, based, in part on the earlier theories of Alexander Oparin (1924), about the origin of the solar system and the chemical events associated with this process. One of the points that Urey made was that the atmosphere of primitive earth was much different from the modern atmosphere and likely consisted of a highly reducing gas mixture of methane, ammonia, hydrogen sulfide, and hydrogen. Urey further suggested that with such an atmosphere it might be possible to synthesize organic compounds that in turn could have provided the raw materials needed for the emergence of life. He also pointed out that, up until that time, few experiments had been conducted to mimic prebiotic organic synthesis and suggested that someone needed to try to synthesize organic compounds using
reducing conditions; which was a suggestion that Miller took hold of. [2]