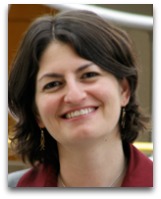 In human chemistry, Stefani Brooke Engelstein (1970-) is an American anti-reductionist comparative literature scholar noted for her 2008 two cultures book Anxious Anatomy: the Conception of the Human Form in Literary and Naturalist Discourse, the second chapter of which is devoted to a dissection and interpretation of German polymath Johann Goethe’s 1809 physical chemistry based novella Elective Affinities, commenting, for example, on how Ottilie rejects talk of human kinship with monkeys (evolution theory), the ECHO cypher, how Goethe's "The Metamorphosis of Plants" (1790), "Metamorphosis of Animals" (1806), and Elective Affinities are to be viewed as a three-part treatise on metamorphology, the significance of the opening P1:C1 grafting scene, among other subjects. [1]

Elective Affinities
In 2008, Engelstein, in her Anxious Anatomy: the Conception of the Human Form in Literary and Naturalist Discourse, devoted her chapter "Formative Drives", on Goethe's Elective Affinities, albeit in some sense attempting to marginalize and to discredit the human chemical theory used by Goethe, arguing that: the title is a "misleading allusion"; that the "characters do not mimic the behavior of the chemicals to which they are compared"; that Goethe's famous anonymous advertisement was him pointing out that he was "not trying to map human relations into chemical reactions or vice versa"; that the theory used was an "outdated chemical concept"; that Goethe, in his essay "Analysis and Synthesis", and his mention of the Danaids, was his admittance that his theory "cannot hold water", etc., etc., and uses the term "fail" repetitively, in regards to the chemical theory. Engelstein cites Beda Allemann and Jeremy Adler in support of her position:

"Adler disputes the reductive determinism in Goethe's idea of nature, thus relieving the most dangerous consequence of the analogy for human decision making. Allemann goes one step further and demonstrates definitively that the analogy between chemical and characters fails."

That Adler "disputes reductive determinism", however, seems to be nearly a complete false assertion, nearly to the point of putting words in his mouth, being that Adler spent over a decade doing his PhD dissertation extolling the reductive deterministic human chemical reaction point of view in Goethe's work. In any event, the gist of Engelstein aversion to Goethe's human chemical theory, which Goethe defensively claimed was true, is found in the following statement by Engelstein:

"Just as the characters so failingly interpret the world around them, so we are confronted with the reality that the relations and affinities between things as well as between people, are a result of a fluctuating combination of will, chance, and law."

Engelstein, in short, has a belief system rooted in the doctrine of free will and that each person freely chooses between right and wrong, which is the polar opposite to Goethe's belief system, as stated famously P2:C5, namely that “none are more hopelessly enslaved than those who falsely believe they are free.” Engelstein also in her mention of "chance" seems to admit belief in evolution occurring via a mixture of blind random chance and law. This again is the polar opposite of Goethe's metamorphosis theory (see: morphology) of evolution, according to which dynamic form change occurs via predetermined measures (see: prediction) of the force of chemical affinity.

Science and society program
Since 2009, Engelstein has been the head of the Missouri University’s 2000-launched Life Sciences and Society Program, a field of study at the juncture of the science and culture, encompassing investigations of the historical, cultural, ethical, and economic contexts, which seems to be something in the sphere of the two cultures arena (see: two cultures university department). The program promotes the cultivation of connections between the logic and languages of the sciences, social sciences, and humanities. [2]