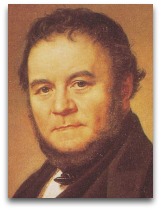 In hmolscience, Stendhal (1783-1842) (CR:14), aka Marie-Henri Beyle, was French realism writer noted for his 1822 book On Love, wherein he describes the phenomena of “crystallization”, wherein, as cited in literature chemistry, the perceived level of beauty or physical attractiveness of a person one is falling in love with seemingly increases in the mind’s eye, and for his atheism promoting statements.

He then employed this model to explain the transformation that occurs when two people fall in love. "When we are in Bologna, we are entirely indifferent; we are not concerned to admire in any particular way the person with whom we shall perhaps one day be madly in love with; even less is our imagination inclined to overrate their worth." In a word, in Bologna “crystallization” has not yet begun. When the journey begins, love departs. One leaves Bologna, climbs the Apennines, and takes the road to Rome. The departure, according to Stendhal, has nothing to do with one’s will; it is an instinctive moment. This transformative process actuates in terms of four steps along a journey: first admiration, second acknowledgement, third hope, and forth delight. [1]

“Gods only excuse is that he does not exist.”

“We call an action ‘natural’ when it does not differ from the habitual mode of action.”

“The only unions which are legitimate are those ruled by a genuine passion.”

“Whatever some hypocritical ministers of government may say about it, power is the greatest of all pleasures. It seems to me that only love can beat it, and love is a happy illness that can't be picked up as easily as a ministry.”