Overview
In 1708, Gray, in a letter to Hans Sloane, described the use of down feathers, a stick, and some type of Hauksbee generator, such as shown adjacent, which he used to detect electricity, specifically to make electric charge pass from the glass tube to the feather, which then enabled the feather to attach to a stick of wood. [3] The gist of his findings are as follows:

“If a plume of feathers, tied to a stick, is presented to the glass tube and then withdrawn, its fibers are found to adhere to the wood, as if there had been some electricity communicated to the stick or feather.”

Gray, in the years to follow, failingly attempted to electrify metals by heat, friction, and percussion, or something along these lines. [5]

In early 1729, Gray was ruminating on the following idea:

In Feb 1729, Gray noticed that a feather attracted to the corked end of a Hauksbee tube (3-feet long and 1.2-inch diameter), rather than the glass; this is summarized as follows:

“Gray used a flint-glass tube corked at both ends to keep out the dust; a wise precaution, as Hauksbee had shown, for contaminants within the tube reduce its electricity. And a fortunate precaution. Gray wondered whether the stoppers themselves altered the tube's power. They did not. While gleaning this information he found that a down feather released near the end of the tube went not to the glass, but to the cork. ‘I then held the feather over against the flat end of the cork, which attracted and repelled many times together; at which I was much surprised, and concluded that there was certainly an ‘attractive virtue’ communicated to the cork by the excited tube’.”

Gray then began to test to see how far he could extend the ‘attractive virtue’ through the cork, by connecting things to the cork; this is summarized as follows:

“Gray exploited his discovery by trying how far he could communicate the ‘attractive virtue’. He fixed an ivory ball on a stick thrust into the stopper; it received a stronger virtue than did the cork in the first exploratory experiment. He then varied the nature of the ‘line’ (heretofore the stick) and of the ‘receiving body’ (the ball). For the former, he substituted iron or brass wire, and packthread; for the latter, a shilling, a tea kettle, a silver pint pot, stones, bricks, tiles and vegetables. All proved satisfactory. The metals were 'strongly electrical, attracting the leaf-brass to the height of several Inches’; and so Gray succeeded at last in awakening their hidden electricity.”

In later experiments, in the home of Granville Wheler, Gray was able to conduct electricity, through hemp cord, hung or insulted (from the conducting wood sticks) by silk, through up to specifically 80.5-feet in the following experimental setup: [1]

Gray and Wheler than stringing hemp cord around the home of Wheler, as shown below, getting the conduction to travel, supposedly, several hundred feet: 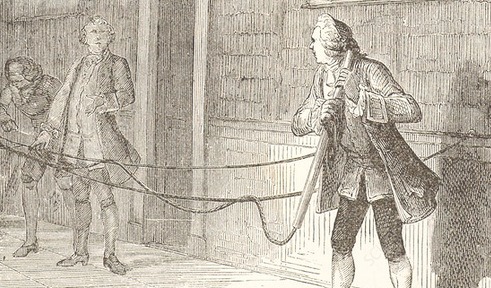 In 1731 to 1732, Gray published a series of papers in the Royal Society which demonstrated that some substances where conductors of electricity, and others were nonconductors or insulators. [2]

In the decades to follow, others began conducting their own Gray-styled experiments, such as: 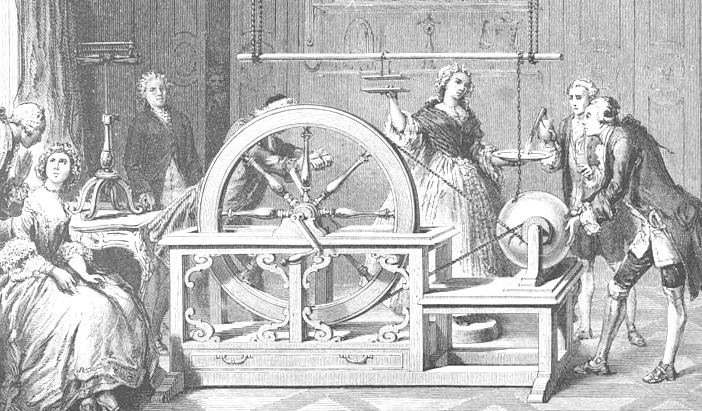 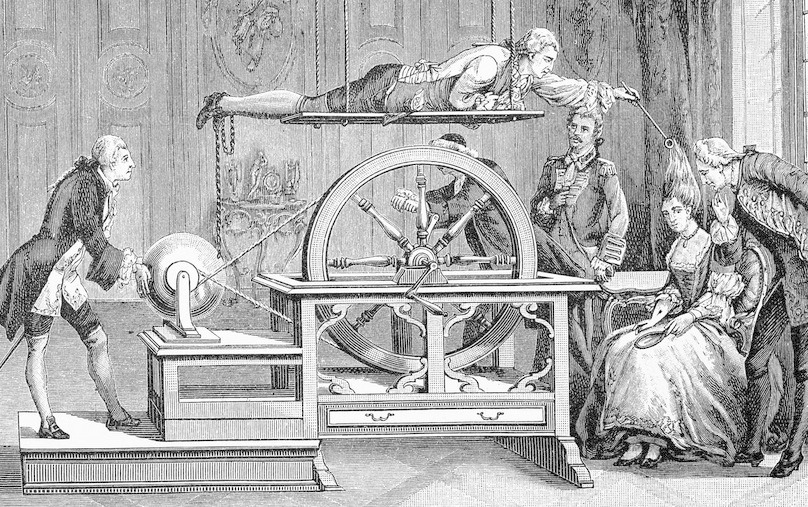 -
One of the more famous of these was the so-called “flying Boy” (Ѻ) demonstration, popular in the mid–18th century, wherein a boy is suspended by rope from the ceiling, an electric charge is applied, and the boy then performs feats of apparent magic, like turning the pages of a book by just passing his hand over them, or touching a girl insulted by sanding on a barrel, who then raises bits of paper with her hand, as shown below: 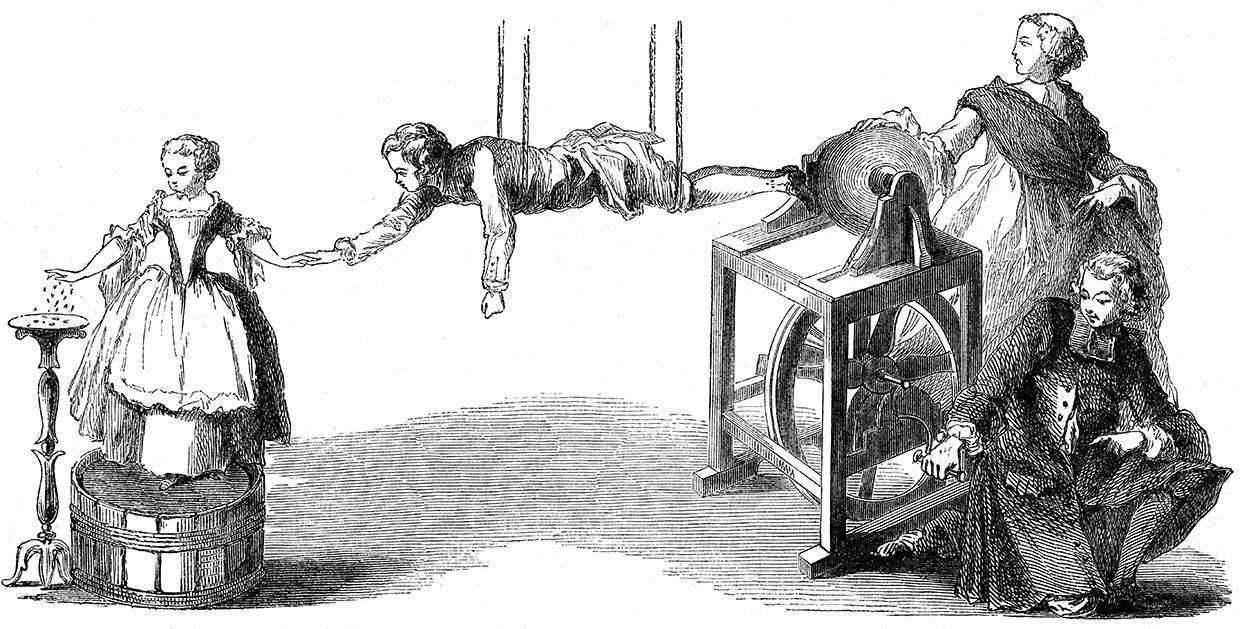 Quotes | By
The following are quotes by Gray:

“In 1729, I communicated to Desaguliers, and some gentlemen, a discovery I had then lately made, showing that the electric virtue of a glass tube my be conveyed to any other bodies, so as to give them the same property of attracting.”