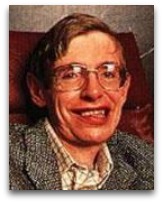 In existographies, Stephen Hawking (1942-2018) (IQ:185|#100) [RGM:20|1,500+] (CR:136) was British astrophysicist noted for his 1965 PhD thesis which argued that if a star can collapse inwards to form a singularity, coined a “black hole” in 1967 by American physicist John Wheeler, then so to can a singularity explode back outward; thus giving an explanation for the Big Bang. [1] Hawking’s thesis was stimulated by research of mathematician Rodger Penrose, and based on Albert Einstein’s 1914 general theory of relativity. Hawking is a key figure in the development of the subject of black hole thermodynamics.

“It is a matter of common experience, that things get more disordered and chaotic with time. This observation can be elevated to the status of a law, the so-called Second Law of Thermodynamics. This says that the total amount of disorder, or entropy, in the universe, always increases with time. However, the Law refers only to the total amount of disorder. The order in one body can increase, provided that the amount of disorder in its surroundings increases by a greater amount. This is what happens in a living being. One can define Life to be an ordered system that can sustain itself against the tendency to disorder, and can reproduce itself. That is, it can make similar, but independent, ordered systems. To do these things, the system must convert energy in some ordered form, like food, sunlight, or electric power, into disordered energy, in the form of heat. In this way, the system can satisfy the requirement that the total amount of disorder increases, while, at the same time, increasing the order in itself and its offspring.”

Here we see an incorrect presentation of things; a result of the mishap equivalence of entropy as disorder and the second law as the disorder of the universe tending to a maximum, which is NOT what is presented in Clausius’ The Mechanical Theory of Heat (1865). Correctly, the discussion should be turned "towards free energy", as Schrodinger famous said in his Note to Chapter 6.

IQ | Mensa test
In 1962, Stephen Hawking, age 20, during his third year at Oxford, began to experience clumsiness, and at one point fell down some steps; after which, worried that his brain might be damaged, took a Mensa test (Ѻ) to test for mental detriment; he found that he scored between 200 to 250 (Ѻ)(Ѻ) or 245 exactly (Ѻ) as some report. Puzzlingly, to note, into the early 2000s, it became newspaper fodder that Hawking’s Mensa test IQ was 160, particularly anytime any new sub-teenage rising proto-prodigy makes the headlines.

Thermodynamics
In thermodynamics, Hawking is noted for his 1973 paper “The Four Laws of Black Hole Mechanics”, co-written with Australian theoretical physicist Brandon Carter and American physicist James Bardeen, which argued, on the earlier hypothesis of Mexican-born Jewish physicist Jacob Bekenstein that the area of an event horizon is a measure of the entropy of a black hole (black hole entropy), for the existence of black hole laws, which “correspond to and in some way transcend the four laws of thermodynamics”, on the logic that the event horizon and surface gravity of a black hole “have a close analogy with entropy and temperature, respectively.” [2]

A Brief History of Time
In popular culture, Hawking is famous for his 1988 book A Brief History of Time, a short history of the universe, in layperson’s terms. Having sold about 10-million copies, it is one of the highest-selling science books of all time. During the writing of the book, an editor famously warned Hawking that for every equation in the book the readership would be halved, hence it includes only a single equation: E = mc². Hawking’s book is notable for introducing many simplified thermodynamics perspectives, one being supposed violations of the second law of thermodynamics. In one instance he states:

“The second law of thermodynamics has a different status than that of the other laws of science, such as Newton’s law of gravity, for example, because it does not always hold, just in the vast majority of cases.”

This quote has become a common launching point for novice thermodynamics researchers who would like to argue that the second law can be violated, and that it particularly does so for the case of evolution. Correctly, however, Hawking’s point of view is an oversimplification of a contrived argument, stemming from the writings Austrian physicist Ludwig Boltzmann, which states that there is a small chance that the particles of an isolated ideal gas system could, according to probability arguments, collect themselves into half of the container or into one corner of it, thus, it is argued, decreasing entropy or increase order. It must be noted here that the statistical view is only an interpretation of the arguments presented by Clausius; thus a disproof of an interpretation in no way conflicts with the original presentation.

Entropy and psychological arrows
In the latter half his book, Hawking goes into simple discussions of how thermodynamics relates to the existence of intelligence life. He states, for instance, that “a strong thermodynamic arrow is necessary for intelligent life to operate” and that the psychological arrow points in the same direction of the thermodynamic arrow. In the Illustrated 1996 edition, Hawking gives a diagram (shown adjacent) eluding to the idea that the memorization of a book correlates to a decrease in the entropy (increase in order) of the central nervous system by about a million units and correspondently an increase in entropy (increase in disorder) of the body and surroundings of the body by about a million million million million units. [3]

This diagram, is notable for having given American chemical engineer Libb Thims insight, in 2001, into the idea that instantaneous changed in neurological entropy, such as when a person obtains a college degree (entropy decrease ↓), can effect correlative changes in individual human Gibbs free energies (increase or decrease), via the combined law of thermodynamics:

where f indicates the "final" and i the "initial" state of the process (four-year degree), thus affecting the spontaneity of human chemical reactions, in particular love the chemical reaction, in the sense that it is statistically easier to get someone to fall spontaneously in love with another person in possession of a college degree than without. [4]

The following are Hawking's comments on god and religion, which seem to evolve from ambiguous "mind of god" talk (1988) to theism-attacking atheism-like statements (2007) to admitted and open atheist (2014):

“Cosmology is a kind of religion for intelligent atheists.”

— Stephen Hawking (c.1962), description (Ѻ) to his wife, when they first met, about himself

“If we discover a complete theory, it would be the ultimate triumph of reason – for then we should know the mind of god.”

“If you believe in science, like I do, you believe that there are certain laws that are always obeyed. If you like, you can say the laws are the work of god, but that is more a definition of god than a proof of his existence.”

“I’m not religious in the normal sense. I believe the universe is governed by the laws of science. The laws may have been decreed by god, but god does not intervene to break the laws.”

“God did not create the universe.”

“Philosophy is dead. Philosophy has not kept up with modern developments in science, particularly physics. Scientists have become the bearers of the torch of discovery in our quest for knowledge.”

“M-theory predicts that a great many universes were created out of nothing. Their creation does not require the intervention of some supernatural being or god. Rather, these universes arise naturally from physical law. They are a prediction of science.

“Before we understand science, it is natural believe that god created the universe. But now science offers a more convincing explanation. What I meant [in A Brief History of Time (1988) (Ѻ)] by ‘we would know the mind of god’ is, we would know everything that god would know, if there were a god. Which there isn’t. I’m an atheist.”

Education
Hawking completed his BA in physics in 1962 at Oxford University, focusing on thermodynamics, relativity, and quantum mechanics. He completed his PhD at Cambridge in 1965 in theoretical astronomy and cosmology and 1979 became a professor of mathematics there. [2]

See: Founders of thermodynamics and suicide

In 1985, Stephen Hawking, one the founders of black hole thermodynamics, following a complication wherein he caught pneumonia, after which he underwent a tracheostomy operation, during which a tube was inserted into his windpipe through his neck, bypassing his mouth and nose and irreversibly removing his voice, he admitted that he tried to commit suicide:

“I admit that when I had my tracheostomy operation, I briefly tried to commit suicide by not breathing. However, the reflex to breathe was too strong.”

Quotes | On
The following are quotes on Hawking:

“The human race is just a chemical scum on a moderate-sized planet, orbiting around a very average star in the outer suburb of one among a hundred billion galaxies.”

“Physics may explain the mysteries of the universe but it is cold and unemotional. So I try not to let it affect my family life.”

— Stephen Hawking (2010), ABC interview, response to query: “how does your knowledge impact other areas of your life, e.g. your appreciation of music, of art, your family?” (Ѻ)

“I regard the brain as a computer which will stop working when its components fail. There is no heaven or afterlife for broken down computers; that is a fairy story for people afraid of the dark.”