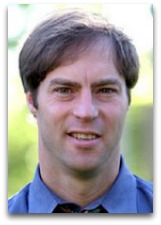 In hmolscience, Stephen Meyer (1958-) (CIR:15) is an American physicist-philosopher noted for his 1992 to 2005 efforts to promote an ontic opening + information stylized "intelligent design" model of creationism.

Strobel | Interview
In circa 2003, Meyer was interviewed by Lee Strobel, who queried him to provide six examples of where he believes that science points towards theism, to which he responded with:

1) Big bang: the fact that energy, matter, space, and time had a beginning is antimaterialistic; pointing towards a first cause.
2) Anthropic fine-tuning: the constants of the universe are fine-tuned to create life.
3) Origin of life: information (DNA) is required to create life; the machine code of genes is computer-like; computers run on software; software is made by intelligent programs or engineers; pointing towards god as that intelligence.
4) Molecular machinery; cells have machine-like parts, which are “irreducibly complex”, in Michael Behe’s terminology; which must be designed, just as an engineer designs parts for a car; in a way not accountable via Darwinism.
5) Cambrian explosion: a geological-evidenced sudden infusion of new “biological information”, not accountable via Darwinism, points towards an intelligent designer.
6) Human consciousness: self-reflection is more than just interaction of physical brain matter; theism provides the best answer of where it came from.

Debates
In 2005, on Strobel’s Faith Under Fire show, Meyer debated Michael Shermer on four of his six theism points. (Ѻ) He has also debated has debated atheists: Peter Atkins and Eugenie Scott.

In 1995, George Gilder and Meyer got funding from the Christian-promoting multi-billion dollar H.F. Ahmanson group, and therein formed the “Discovery Institute” themed as a think tank opposed to materialism, which worked in the decade to follow to promote the neo-creationism brand of religion called “intelligent design”, until the 2005 Kitzmiller vs Dover case, wherein intelligent design in public schools was deemed unconstitutional, being in violation of the first amendment.

Education
Meyer completed his BS in physics and earth science in 1981 at Christian Whitworth College, then completed his PhD in the history and philosophy of science, specifically on the scientific and methodological issues of the origin of life biology, in 1991 at the University of Cambridge.