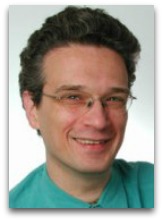 In hmolscience, Steven J. Rosen (1955-) is an American Hindu studies author noted, in religious thermodynamics, for his 2002 to 2007 work on physics of reincarnation.

Overview
In 2002, Rosen, in his Gita on the Green, used thermodynamics in analyzing the Hindu subjects of reincarnation, the soul, etc., and Newton’s third law of motion in discussing karma in the guise of modern science;he following is an excerpt: [1]

“Modern science recognizes a sort of spark or energy that animates the body, something that distinguishes it from dead matter. Further, the first law of thermodynamics, stating that energy cannot be created or destroyed, gives us reason to pause when thinking about reincarnation—if there is energy in the body, and this energy cannot be created or destroyed, where does it go at the time of death?”

“In terms of modern science, one might say that a quantum of energy pervades the body, and that this energy, like all energy, cannot be created or destroyed. This is called the first law of thermodynamics. Since the energy that animates the body continues to exist after death, one might argue that it somehow merges into the totality of existence. But Krishna says, ‘No’. He argues that the quantum of energy simply inhabits another body, which it inadvertently chooses based on previous actions (karma) and desires (kama).”

In explaining karma, Rosen states that it is a fundamental law of the Bhagavad Gita, which, looked at in modern terms, can be seen as a sort of metaphysical extension of Newton’s third law of motion—for every action, there is an equal and corresponding reaction. On this logic, Rosen states:

“This law, which survives death”, operates such that “if in this life one’s actions are not fully realized, that is, if they have not garnered a commensurate reaction, then a subsequent life is created to reap all that was previously sown.”

Beyond this, Rosen argues that the essence of this is karma is a non-physical ‘something’ that separates living beings form the physical-chemical components of the body. He states: “whatever one chooses to call it, this nonphysical life force distinguishes a living body from an inert chemical shell.”