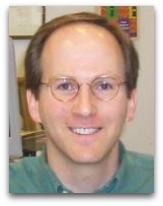 In human mathematics, Steven Strogatz (1959-) is an American applied mathematician noted for []
-
Love | Mathematics
In 1978, Strogatz, in a term paper entitled "Differential Equations and the Progress of Love Affairs", based on a relationship he was in, the first page shown below, for a Sociology 212 (compare: Sociology 23) exam at Princeton University, described lover affairs as “time bombs” the detonation of which is indeterminate: [8] 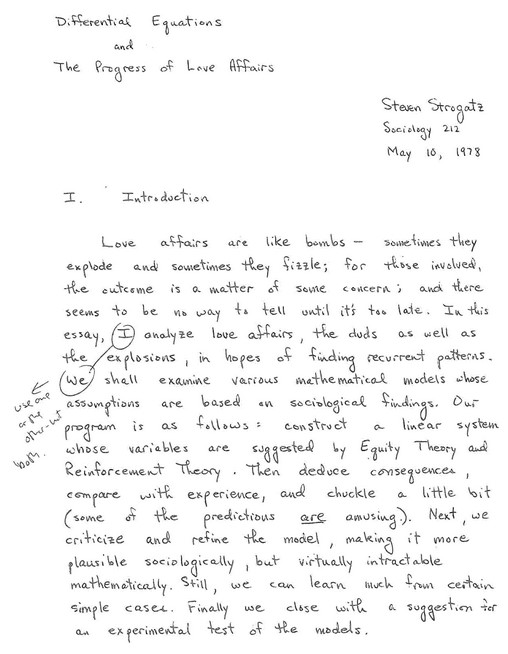 In 1988, Strogatz followed this up with his article “Love Affairs and Differential Equations”, wherein he does some of the first differential equation formulation for the equation of love and in which he explains how he teaches students about ordinary coupled differential equations using examples of variations of levels or ratios of love and hate, similar to the Gottman stability ratio, in Shakespeare-style Romeo and Juliet type relationships. [1]
-
Sync
Strogatz's most popular book his his 2003 book Sync: the Emerging Science of Spontaneous Order, in which he attempts to reconcile the seeming contradiction to the tendency towards disorder view of entropy (see: principle of elementary disorder) with spontaneity, and the the formation of natural assemblies, from cells to humans. In summary of the relation between emergence and entropy, Strogatz states: [7]

“Scientists have long been baffled by the existence of spontaneous order in the universe. The laws of thermodynamics seem to dictate the opposite, that nature should inexorably degenerate toward a state of disorder, greater entropy. Yet all around us we see magnificent structures—galaxies, cells, ecosystems, human beings—that have somehow managed to assemble themselves. This enigma bedevils all of science today. The key to unlocking the mysteries of self-organization, according to Belgian chemist Ilya Prigogine and his colleagues, lies in a deeper understanding of thermodynamics, where emergence of order is a victorious uphill battle against entropy, as a complex system feeds itself on energy flowing in from the environment.”

He also discusses the history of the discovery of the Belousov-Zhabotinsky reaction.

Calculus of friendships
In his 2009 The Calculus of Friendship, Strogatz weaves a collection of 30-years of correspondence letters between himself and his high school math teacher into reflections on the philosophical similarities between calculus and human relationships. [4]

In his 2009 article “Energy Landscape of Social Balance”, Strogatz and colleagues seem to take a stab at deriving a mathematical version of a social energy landscape, the synopsis of which is: [5]

“The shifting of alliances and rivalries in a social group can be viewed as arising from an energy minimization process.”

This basis of this model, however, does not seem to be culled from thermodynamics, but rather from what is called the 1940s "balance theory" of Austrian psychologist Fritz Heider. [6]

Education
Strogatz completed his BS in mathematics at Princeton in 1980; then spent two years as a Marshall Scholar at Trinity College, Cambridge, where he completed a BA (1982) and MA (1986); after which he completed his PhD at Harvard in 1986 with a dissertation on the “The Mathematical Structure of the Human Sleep-wake Cycle”. [2] Strogatz currently is a professor of applied mathematics a Cornell University. [3]