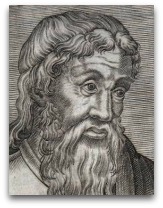 In existographies, Strabo (c.63BC-24AD) (IQ:150|#636) (Cattell 1000:500) was a Greek geographer, philosopher, and historian, noted for his 23AD Geography, which established the science of geography, based on then-current views, and historical precursor models; he is oft-cited in the silent historians problem.

Overview
In c.23AD, Strabo, in his Geography, established the science of geography, based on then-current views, and historical precursor models.

Quotes | On
The following are quotes on Strabo:

“Geographical knowledge was advanced by Strabo, who lived in the Augustan era; but researches were chiefly confined to the Roman empire. Strabo was, like Herodotus, a great traveler, and much of his geographical information is the result of his own observations. It is probable he is much indebted to Eratosthenes, who preceded him by three centuries, and who was the first systematic writer on geography. Strabo appears at as great disadvantage as Pliny or Ptolemy; yet the work of Strabo, considering his means, and the imperfect knowledge of the earth's surface, and astronomical science, was really a great achievement of industry. He treats of the form and magnitude of the earth, and devotes eight books to Europe, six to Asia, and one to Africa. His great authorities are Eratosthenes, Polybius, Aristotle, Antiochus of Syracuse, Posidonius, Theopompus, Artemidorus Ephorus, Herodotus, Anaximenes, Thucydides, and Aristo, chiefly historians and philosophers. Whatever may be said of the accuracy of the great geographer of antiquity, it cannot be denied that he was a man of immense research and learning. His work in seventeen books is one of the most valuable which have come down from antiquity, both from the discussions which run through it, and the curious facts which can be found nowhere else. It is scarcely fair to estimate the genius of Strabo by the correctness and extent of his geographical knowledge.”

“Is it not strange that the principal historians of the first century are silent as to Christians and their faith. Plutarch and Strabo, for instance, who lived and wrote soon after the alleged advent of Christ, are both silent upon the leading events recorded in the Gospels.”

Quotes | By
The following are quotes by Strabo:

“If the opinion of Posidonius [c.120BC] is well-founded, we should even honor the atomic theory of an old philosopher of Sidon, Mochus, who lived prior to the Trojan War [c.1200BC]. The theory of Democritus about the atom is of Phoenician origin.”

References
1. Taylor, C.C.W. (1999). The Atomists: Leucippus and Democritus: Fragments: a Text and Translation with a Commentary by C.C.W. Taylor (pg. 153). University of Toronto Press.