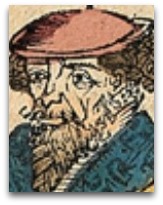 Overview
In 306 to 310BC, Strato taught in Lampsacus; where he might have known Epicurus. Strato attended Aristotle's school in Athens, after which he went to Egypt as tutor to Ptolemy (309–246 BC) (Ѻ), where he also taught Aristarchus of Samos. He returned to Athens after the death of Theophrastus (c.287 BC), succeeding him as head of the Lyceum.

Strato devoted himself especially to the study of natural science, and increased the naturalistic elements in Aristotle's thought to such an extent, that he denied the need for an active god to construct the universe, preferring to place the government of the universe in the unconscious force of nature alone.

Experiments
Strato emphasized the need for exact research, and, as an example of this, he made use of the observation of how water pouring from a spout breaks into separate droplets as evidence that falling bodies accelerate.

Hero
In 50AD, Hero, in his Pneumatica, is said to have overview the physics of Strato and Ctesibius, via outlining an atomic theory in which matter consists of particles mixed with distributed vacua.

Quotes | On
The following are quotes on Starto:

“Equally intolerable is the inconsistency of Theophrastus, for at one moment he allots the divine primacy to mind, at another to the heavens, and yet another to the signs of the heavenly stars. Another figure unworthy of attention is Theophrastus’ disciple Strato, the one they call the ‘physicist’, for he proposes that all divine power lies in nature, which bears within it the causes of birth, growth, and diminution, but which lacks all sensation and shape.”

“Strato’s atheism is the most dangerous of the ancients.”

“Those same persons, who at the present day discover atheism to be such a strange system, admit there could have been atheists formerly [but not presently]. Is it, then, that nature has endued us with a less portion of reason than she did men of other times? Or should it be that the god of the present day would be less absurd than the gods of antiquity? Has the human species then acquired information, with respect to this concealed motive-power of nature? Is the god of modern mythology, rejected by Vanini, Hobbes, Spinoza, and some others, more to be credited than the gods of the pagan mythology, rejected by Epicurus, Strato, Theodorus, Diagoras, &c. &c.? Tertullian pretended that Christianity had dissipated that ignorance in which the pagans were immersed, respecting the divine essence, and that there was not an artisan among the Christians who did not see god, and who did not know him. Nevertheless, Tertullian himself admitted a corporeal god, and was therefore an atheist, according to the notions of modern theology.”

“Cudworth, who has written a most erudite but unsatisfactory volume on the proofs for the being of a god, is obliged to confess that Strato was an atheist. Velleius, an Epicurean atheist, in Cicero, when speaking of the different kinds of atheists, gives such a character of Strato as makes him appear to have been a sort of "atheistical theist," or divine atheist.”