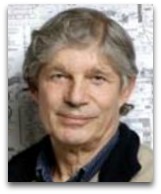 In existographies, Stuart Kauffman (1939-) (DN:1/5±) (CR:101) is an American physician, biochemist, and self-proclaimed "humanist atheist" (Ѻ), noted, in animate thermodynamics, for his 1995 auto-catalytic closure thermodynamic work cycle origin of life theory, according to which life emerged, following attainment of auto-catalytic closure, 3.5 billion years ago, from a "soup of [dead] molecules", which evolved into the biosphere.

Defunct theory of life
The following statement by Kauffman, grappled with, for some time, without resolution, by American electrochemical engineer Libb Thims, in and around the period of the writing of his 2007 molecular evolution chapter (Ѻ):

was one of the stepping stones to the arrival of the 2009 defunct theory of life position:

Overview
In 1993 to 2008, Kauffman began to present his theories on self-organization and complexity, in which life is argued to have arisen from “a soup of molecules, evolving into the biosphere” at the point when the early chemicals of the earth find “catalytic closure”, i.e. when they began to auto-catalyze themselves, in the form of thermodynamic cycles, driving by the free energy of the universe. In the 2006 book What We Believe But Cannot Prove, Kauffman, one of the hundred authors of the book to speculate on what each uniquely believes, tells:

“[I believe] there [is] a fourth law of thermodynamics, or some cousin of it, concerning self-constructing nonequilibrium systems, such as biospheres, in the cosmos [but cannot prove it].”

Following a bit of explanation in his belief, Kauffman states that how he sees the law, as otherwise stated, is that ‘the diversity of things that can happen next increases, on average, as fast as it can.’ [5] Kauffman’s most noted publication is his 1995 book At Home in the Universe: the Search for the Laws of Self-Organization and Complexity. [1] Ernst & Young consulting firm, to note, is said to have sent its clients fifteen thousand copies of At Home in the Universe. [7]

Adjacent possible
In 1999, in promotion of his upcoming 2000 book Investigations, Kauffman began to outline what seems to be his unified theory, that of what he calls the “adjacent possible” (Ѻ) or chemically adjacent possible, a rather ill-defined term, which he describes as those regions of the biosphere in which “autonomous agents” (Kauffman’s term for a minimal living thing, which meets the criterion: (a) is auto-catalytic, (b) completes one thermodynamic work cycle, (c) has a membrane, and (d) push their way into novelty—molecular, morphological, behavioral, and organizational. [6]

Auto-catalytic closure
Kauffman defines life as an autonomous agent, or open system situated in and part of an environment to which it senses, capable of completing at least one thermodynamic work cycle. [2] In short, the hypothesis Kauffman puts forward is that whenever a mix of atoms and molecules accumulate, there is a small chance that an autocatalytic reactive system, which can be thought of as a rudimentary type of self-maintaining and self-reproducing metabolism, will from this life will emerge.

He states that life, at its roots, is the property of what is called ‘catalytic closure’ as proffered to be found amid heterogeneous collections of reacting molecular species. An autocatalytic system is one in which the end-products of a reaction function as a catalysis for the initial-reactants, i.e. one in which the molecules speed up the very reactions by which they themselves are formed: A makes B; B makes C:

but then the product C is said to make or catalyze the reactact A in a sort of chemical reaction feedback loop. Hence, according to Kauffmann:

Using this logic, Kauffmann reasons that past a certain critical threshold of molecular density, a web of catalyzed reactions emerges, which can be thought of as being alive. In his own words, “as a threshold of diversity is crossed, a giant web of catalyzed reactions crystallizes in a phase transition.” In this view, to account for the origin of life, Kauffman tells us, “a critical diversity of molecules must be reached for the system to catch fire, for catalytic closure to be attained.” [2]

Thermodynamic work cycles
In the 2000 book Investigations, Kauffman expanded on his theory of autocatalysis, by arguing for a new fourth law of thermodynamics to explain such a process. Kauffman's start point is autocatalysis: that it is very likely that self-reproducing molecular systems will form in any large and sufficiently complex chemical reaction. He then goes on to investigate what qualities a physical system must have to be an autonomous agent. In giving his definition of an autonomous agent he says:

The difficulty here is that the bacterium is a large 15-element molecule (bacteria molecule), and in this view, molecules in fluid mediums are more correctly said to move along paths of minimum free energy or decreasing free energy gradients, according to the combined law. [2] In any event, on this definition, Kauffman then asks, knowing that the bacterium is just a physical system, “what must a physical system be such that it can act on its own behalf?” In answer to this question, he reasons: “might there be a fourth law of thermodynamics for self-constructing open thermodynamic systems such as biospheres?”

His aim is to define a new law of thermodynamics for such systems (self-constructing systems, as Kauffman defines them) such as the biosphere that may be hovering in a state of self-organized criticality that are far from thermodynamic equilibrium. This necessitates a rather more detailed coverage of Carnot work cycles and information compressibility than was covered in passing in his earlier books. It leads to the idea that a molecular autonomous agent is a self-reproducing molecular system capable of carrying out one or more work cycles.

In addition, using a bit of statistical thermodynamic verbiology, the universe, he posits, is not yet old enough to have synthesized more than a minute subset of the total number of possible proteins. This leads to the fundamental proposition that the biosphere of which we are part cannot have reached all its possible thermodynamic states. The ones not yet attained - the “adjacent possible” states as Kauffman terms them - are unpredictable since they are the result of the interaction of the large collection of autonomous agents, such as people, or rather one’s genes, and all the other evolving things in the external world. His new fourth law of thermodynamics for self-constructing systems implies that autonomous agents will try to expand into the “adjacent possible” states by trying to maximize the number of types of events that can happen next. In particular, as a candidate fourth law of thermodynamics (for self-constructing systems), Kauffman states: [3]

“Biospheres maximize the average secular construction of the diversity of autonomous agents and the ways those agents can make a living to propagate further.”

In other words, he states, “on average biospheres persistently increase the diversity of what can happen next … biospheres maximize the average sustained growth of their own ‘dimensionality’.” Building on Austrian physicist Erwin Schrodinger’s 1944 book What is Life?, Kaufmann states that as to the issues concerning the core features of autonomous agents able to manipulate the world on their own behalf, his new fourth law theory may differ from the definition of life Schrodinger found. In more detail:

“To state my hypothesis abruptly and without preamble, I think an autonomous agent is a self-reproducing system able to perform at least one thermodynamic work cycle”

He continues “it will require most of this book (308-pages) to unfold the implications of this tentative definition.” [3]

In his 2008 book Reinventing the Sacred, a continuation of the two paged section, of the same title, from his 1995 book, Kauffman ties all of his trademark theories together, i.e. autonomous agents, thermodynamic work cycles, emergence, catalytic closure, etc., to argue that the idea of god, particularly in the Abrahamic religions, needs to be redefined not as a supernatural creator, but as a natural creativity in the universe.

In this work, Kauffman seems to recant some of his earlier efforts at defining a fourth law of thermodynamics to explain complexity. He states, instead, that “we can use the symbol god to mean [in place of natural law] the radical creativity in the abiotic universe, if it’s there, and certainly in the biotic universe”, that reason is an inadequate guide to living life, being that one cannot predict the future, and that “reductionism is inadequate, emergence is real, and in which not everything that happens is describable by law.” Although difficult to state explicitly in words, Kaufmann here seems to be selling out to a hocus pocus of ontic opening like emergence over that of hard science.

Education
Kauffman graduated from Dartmouth College in 1960, was awarded the BA by Oxford University in 1963, and completed an MD at the University of California, San Francisco in 1968. After completing his residency in emergency medicine, he moved into developmental genetics of the fruit fly, holding appointments first at the University of Chicago, then at the University of Pennsylvania from 1975 to 1995, where he rose to professor of biochemistry and biophysics.

Difficulties on theory
Although Kauffman’s theory of evolution as free energy driven-systems containing auto-catalysis types of chemically looped reactions organized in work cycles is one of the more interesting thermodynamics of life theories to have come along since Prigogine, it is flawed to an extent by a number of issues, such as: (a) his superficial knowledge of thermodynamics (e.g. he confuses the term closed with isolated), (b) his Prigoginean-base assumption that the biosphere is continuously in a nonequilibrium state (whereas in contrast heat input is diurnal), (c) his ubiquitous use of perpetual motion themed prefixes, e.g. free-, self-, auto-, etc., (d) his demarcation of dead vs. alive molecules (whereas in contrast there is no such thing as a “live” or "dead" molecule), (e) his theory that life exists as a dissipative structure at the edge of chaos, (f) his subtle use of unwritten free will descriptions (e.g. molecules that act on their own behalf), and (g) his interludes on the topic of religion and deities. The general difficulty, in short, is that in spite of the fact that he occasionally brings the word “free energy” into the discussion, he more often than not reiterates the idea that life is a “self-sustaining network of reactions”, sort of going on their own like a perpetual motion chemical reaction (see: perpetual motion of the living kind).

Quotes | By
The following are quotes by Kauffman:

“Anyone who tells you that he or she know the how life started is a fool or a knave.”