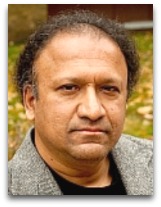 Atheism
In 1971, Joshi, age 13, was taken in by the works of Howard Lovecraft, and therein became influenced by his “strong arguments in support of atheism”. [1]

In 2000, Joshi began to edit and compile a number of publications of classical atheists, such as Henry Mencken, Voltaire, as well as publishing commentary on the new atheists. [2]

Quotes | By
The following are related quotes by Joshi:

“Holbach’s System of Nature is the most exhaustive [and intellectually thorough-going] discussion of atheism — from a scientific, philosophical, moral, and political perspective — ever written.”

“The first atheist of whom we know is one Diagoras, who lived in the late fifth century BCE. It is typical that nothing of this works aside from random fragments survives and that he was forced to flee Athens because he declared that there were no gods. Even in the ages preceding Christianity, the enunciation of explicit atheistic, or even agnostic, views carried with it the threat of both legal punishment and social obloquy.”

“There is scarcely any question that the revolutionary findings of such thinkers as Copernicus, Kepler, and Galileo had the effect of knocking the earth and its occupants from both the physical and moral centrality in the universe.”