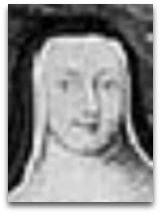 In biographies, Susanne Katharina von Klettenberg (1723-1744) was a German abbess and religious writer, a friend of Catherina Elizabeth Goethe, who is noted for having helped the young Goethe during his convalescent year at home in bed (1768-69), during which period he began his studies in chemistry, particularly the work of Swiss physician-chemist Paracelsus and supposedly the chemistry or alchemical-religious work of Klettenberg herself. [1]

Overview
Klettenberg has been described as a Herrnhut Pietist who was profoundly affected by mystic and theosophic traditions. [4]

A year later, following his recovery, Goethe famously commented to Klettenberg, in a 1770 letter: [2]

“Chemistry is still my secret love.”

It was Johann Herder, to note, who in 1776 had recommended the Chemical Wedding novel to Goethe. [2]

In 1786, possibly related in some way to these studies, as Goethean scholar Donald MacLean notes, Goethe wrote to Charlotte von Stein, mentioning that he saw in Johannes Andreae’s 1616 The Chemical Wedding of Christian Rosenkreutz the making of a good story: [3]

“There will be a good fairy tale to tell at the right time, but it will have to be reborn, it can’t be enjoyed in its old skin.”