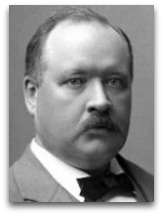 In thermodynamics, Svante Arrhenius (1859-1927) was a Swedish physical chemist notable his Arrhenius equation, which gives the quantitative basis of the relationship between the activation energy and the rate (reaction rate) at which a reaction proceeds.

Education
Arrhenius completed his PhD dissertation in 1884 on the conductivity of electrolytes, done in part at both the University of Uppsala and the Physical Institute of the Swedish Academy of Sciences. The dissertation was not very impressive to the professors at Uppsala, but Arrhenius sent it to a number of scientists in Europe who were developing the new science of physical chemistry, including Rudolf Clausius, Wilhelm Ostwald, and Jacobus van't Hoff. They were far more impressed, and Ostwald even came to Uppsala to persuade Arrhenius to join his research team. Arrhenius declined, however, as he preferred to stay in Sweden for a while (his father was very ill and would die in 1885) and had received an appointment at Uppsala.

In circa 1886, Arrhenius received a travel grant from the Swedish Academy of Sciences, which enabled him to study with Ostwald in Riga (now in Latvia), with Friedrich Kohlrausch in Würzburg, Germany, with Ludwig Boltzmann in Graz, Austria, and with van 't Hoff in Amsterdam.

In thermodynamics schools classification, Arrhenius is said to be part of the Van’t Hoff school or "Arrhenius-Ostwald-van’t Hoff school" as it has been sometimes called.

Activation energy
In 1889, Arrhenius explained the fact that most reactions require added heat energy to proceed by formulating the concept of activation energy, an energy barrier that must be overcome before two molecules will react. What has since come to be known as the Arrhenius equation gives the quantitative basis of the relationship between the activation energy and the rate at which a reaction proceeds.

In particular, building on the previous 1884 work of Dutch physical chemist Jacobus van't Hoff, Arrhenius introduced term “activation energy”, by suggesting that a catalyst forms an intermediate complex with the reactants, which acts to lower the activation energy or barrier to reaction or product formation, the logic of which is embodied in the Arrhenius equation. [1] In particular, Arrhenius found that the plot of the logarithm of the rate constant (ln k) against the inverse of the absolute temperature (1/T) is a straight line: [2]

where the intercept is denoted ln A and the slope is denoted –EA/R, where R is the ideal gas constant, A is the pre-exponential factor, and EA is the activation energy:

He used his positions to arrange prizes for his friends (Jacobus van't Hoff, Wilhelm Ostwald, Theodore Richards) and to attempt to deny them to his enemies (Paul Ehrlich, Walther Nernst, Dmitri Mendeleev). [3]


Heat death
In human thermodynamics, Arrhenius is noted for his for his view of heat death and the second law about which he admitted the universality of the second law but thought, supposedly, that rare exceptions might occur leading to the rebuilding of worlds—perhaps by some conscious "Maxwellian demon", which could sort out individual molecules and thereby create a temperature difference without expending energy. [4]

In his 1909 Worlds in the Making: the Evolution of the Universe, Arrhenius supposedly attributed the heat death theory to Rudolf Clausius and his notion ‘Wärmetod’. [6]

Acid base theory
In 1887, Arrhenius stated the theory that acid ionizes in aqueous solution to produce hydrogen ions (protons), H + , and anions; and a base ionizes in aqueous solution to produce hydroxide ions (OH − ) and cations. Sometime during this period, Max Planck proposed a thermodynamic basis for Arrhenius' theory of electrolytic dissociation.

In 1903, Arrhenius won the Nobel Prize in Chemistry in recognition of his electrolytic theory of dissociation.

Origin of life
In 1903, in regards to the origin of life debate, Arrhenius advanced a version of the meteoroid origin of life theory. Specifically, he thought life might have been carried from planet to planet by the transport of spores.