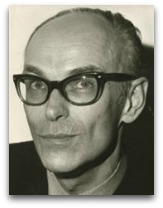 “Notwithstanding this local character, the linear thermodynamics of irreversible processes had already led to numerous applications, as shown by people such as J. Meixner, S.R. de Groot and P. Mazur, and, in the area of biology, A. Katchalsky. It was for me a supplementary incentive when I had to meet more general situations. Those problems had confronted us for more than twenty years, between 1947 and 1967, until we finally reached the notion of ‘dissipative structure’.”

Education
De Groot completed his PhD in 1945, with a dissertation on “The Soret Effect: Thermal Diffusion in Condensed Phases”, under Dutch physicist Cornelius Gorter at the University of Amsterdam. [2]