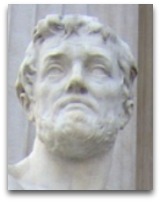 In existographies, Cornelius Tacitus (58-120AD) (Cattell 1000:294) (CR:11) Roman senator, public official, historian of the Roman Empire, who is noted as someone oft-cited having referred to the punishment of "Christians" by Nero and the execution of their founder "Christus" by Pontius Pilate; considered by Thomas Jefferson to be a good historian to read.

Overview
In c.115AD, Tacitus, in his Annals (15:44) (Ѻ)(Ѻ), is reported to have said the following so-called “profane testimony" about a man named “Christus”:

“But not all the relief that could come from man, not all the bounties that the prince could bestow, nor all the atonements which could be presented to the gods, availed to relieve Nero from the infamy of being believed to have ordered the Conflagration, the fire of Rome. Hence to suppress the rumor, he falsely charged with the guilt, and punished Christians, who were hated for their enormities. Christus, the founder of the name, was put to death by Pontius Pilate, procurator of Judea in the reign of Tiberius: but the pernicious superstition, repressed for a time broke out again, not only through Judea, where the mischief originated, but through the city of Rome also, where all things hideous and shameful from every part of the world find their center and become popular. Accordingly, an arrest was first made of all who pleaded guilty; then, upon their information, an immense multitude was convicted, not so much of the crime of firing the city, as of hatred against mankind.”

In 1910, William Smith, in his The Silence of Josephus and Tacitus, building on Arthur Drews, pointed out the following: [1]

“With respect to this famous passage we must observe first, that if it be genuine, it was written in the first quarter of the second century, near the close of the last work of the great historian, most probably after the death of Trajan (AD 117). At the most then it records only a report accepted at that time among Christians. Now it is not at all strange that the fiction (if it be a fiction) of the death under Pilate should be current at that date, nearly three generations after the feigned event. If such a report originated at all, it originated (gradually to be sure) at some time most probably in the first century; it may easily then have obtained currency and reached the ears of Tacitus before AD 110. Its reproduction, at his hands, then, merely attests its existence at that date, but in no degree attests its correctness.”

The general issue here, as Smith points out, is not that there emerged a newly formed Christ-based religious sect in c.100AD, which eventually, by 800AD, became the state religion of the Roman empire, i.e. no doubt Christians, as we now know them began to exist as a bound group, at some point, but rather the contention that there was an actual real person named “Jesus Christ” that went through all of the events described in the Bible is no different than there was an actual person named “Krishna” in India purported to have existed in 1200BC who was “divinely saved from a death pronouncement”, along with most of the other characteristic of events of Jesus. (Ѻ). Both are what Smith correctly calls “feigned events”.

“I have seen the statement at least twice that the words Christ and Krishna came from the same root. In order to arrive at the truth of the matter the subject has been given some thought. Several years ago, I wrote to the professor of Sanskrit in Harvard University for the meaning of the word Krishna. He courteously replied that it meant ‘black’. We have Christ through the Greek christos, which means anointed. At first there seemed to be no relationship existing between ‘black’ and ‘anointed’. But I turned to the Hebrew word for Christ (Mashiach). The verb form (mashach) is defined, ‘to smear or rub over with oil; to anoint with paint; to paint’, etc. While the word means to anoint, it also means to paint. The same word is translated ‘painted’ in Jeramiah 22:14 ‘painted with vermilion’. The logical inference is that in Oriental countries the anointing oil was colored.”

All of this painted black / anointed joint etymology goes back to 3100BC and to Osiris, the original dying and rising god, aka "Osiris Christ" or Osiris Anointed:

“The funeral text spells were also liturgical utterances recited and or chanted during the funerary ritual of the pharaoh (and, perhaps, other noblemen): thus they accompanied the lustration of the corpse, the anointing, the embalming, the splitting of the mouth with the adze, the closing of the lid of the sarcophagus, and so on. The Osiris death and resurrection was indeed the prototype for the Pharaoh's death and resurrection in the afterlife (and later the prototype for all people). Osiris himself was always depicted in a mummy-form, with white cloak, the white crown of Upper Egypt, and the royal crook and flail; his face was often colored black or green symbolizing his ability for resurrection.”

During mummification, the dead were anointed with oil and then covered with a thick black tar, thought therein to mimic Osiris, and thereby guaranteed access to the afterlife.

In c.100AD, with the end of the Egyptian dynasties, and the end of the pharaohs, the Osiris Christ prototype was carried over, during the Roman recension, into the model of the "Jesus Christ prototype", whereby, not just the Pharaoh, but all people could get to the afterlife, if they just became followers of a fictional Christ as man figure; hence, the mythical events of Osiris became the feigned events of Jesus.

Both Krishna and Christ, in short, are Osiris rescripts. Krishna means the "black one" and Christ means the "anointed one". The people who united to follow these different sects existed, but the characters of the each respective sect did not exist.

“But is it conceivable that the early Christians would have ignored so valuable a testimony had they known of its existence, and would they not have known of it had it really existed? The Christian Fathers, who not only collected assiduously all that they could use to establish the reality of Jesus—but who did not hesitate even to forge passages, to invent documents, and also to destroy the testimony of witnesses unfavorable to their cause—would have certainly used the Tacitus passage had it been in existence in their day. Not one of the Christian Fathers in his controversy with the unbelievers has quoted the passage from Tacitus, which passage is the church's strongest proof of the historicity of Jesus, outside the gospels.”

See also
● People claimed to be sun of god