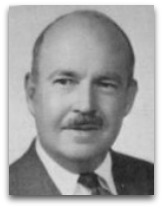 In hmolscience, Talcott Parsons (1902-1979) was an American sociologist, a product of the Harvard Pareto circle so to say, noted for his efforts to ferret out a semblance of a physical sociology.

Social action theory
In 1937, Parsons introduced some type of sociological “action theory”, in respect to how equilibrium relates to society, and how social interchange related to the laws of thermodynamics; quote a noted excerpt: [1]

“The second law of thermodynamics is a statement of the directionality of change in a system; it must be in the direction of increasing entropy. Potential energy is converted into kinetic energy, into action, in the physical sense. Rationality occupies a logical position in respect to action systems analogous to that of entropy in physical systems. Effort energy is, in the processes of action, converted into realization of ends, or conformity with norms. Rationality is one, at least, of the properties in terms of which the extent of this change is to be measured for any given system at any given point in the process of change.”


Parsons further goes on to correlate the second law with German sociologist Max Weber’s process of realization. [2] A notable student of Parsons was German sociologist Niklas Luhmann who had studied under Parsons in 1961 at Harvard, later carrying on his work on social systems and entropy.

In 1953, Parsons was outlining some type of Newtonian mechanics laws of motion based action theory, outlined as follows: [6]

“There are four fundamental generalizations for defining the equilibrium of a social system in terms of four-dimensional space:

Henderson and equilibrium
Parsons, in turn, was a student of American physiologist Lawrence Henderson, who was himself a vicarious student of American engineer Willard Gibbs, and it was through the teachings of Henderson that Parsons learned his view of equilibrium in society. Parsons came to believe that believing that without equilibrium, a society would display no order. [3] Henderson had intensive discussions with Parsons during the writing of the manuscript for his 1937 The Structure of Social Action. A common view, posited by Kenneth Stokes, is that the theory of equilibrium, used by Parsons, was borrowed from thermodynamics. [4]

Interchange and thermodynamic laws
See main: sociological thermodynamics
Throughout his 1953 Working Papers in the Theory of Action, Parson advances the claim that interchange is isomorphic with the laws of thermodynamics. An analysis of this publication reveals that Parsons was not merely making a metaphorical argument, but rather asserting that the two theories (thermodynamics and interchange) have similar substantive content. In doing so, Parsons is said couch his discussion of social interchange in the language of thermodynamics. [5]