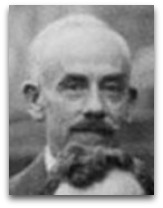 In thermodynamics, Theophile de Donder (1872-1957) (IQ:170|#301) was a Belgian mathematical physicist and thermodynamicist know as the “father of irreversible processes”, founder of the Brussels school of thermodynamics, mentor to Russian-born Belgian chemist Ilya Prigogine, and notable for his 1922 free energy formulation of chemical affinity. [1] De Donder introduced the concept of the “degree of advancement” ξ or extent of reaction in 1920. [7]

Education
In 1899, De Donder received his doctorate in physics and mathematics from the Université Libre de Bruxelles, for a thesis entitled Sur la Théorie des Invariants Intégraux (On the Theory of Integral Invariants). [2] He was professor between 1911 and 1942, at the Université Libre de Bruxelles. Initially he continued the work of Henri Poincaré and Elie Cartan. From 1914 he was influenced by the work of Albert Einstein and was an enthusiastic proponent of the theory of relativity.

Brussels school
In 1918, the “birth year” of the Brussels school, the then 45 years old de Donder began to devote his time to superior teaching, after he was for some years appointed as a secondary school teacher, on the nature of thermodynamics. At this time, he was promoted to professor at the Department of Applied Science, and began without delay the writing of a course on theoretical thermodynamics for engineers. [3]

Starting with German physicist Rudolf Clausius' second principle, having been formulated as an inequality: "uncompensated heat" is positive - or, in more recent terms, entropy production is positive, where the inequality refers, of course, to phenomena that are irreversible, as are any natural processes, de Donder, in the words of Prigogine, "extracted the entropy production out of this ‘sfumato’ when related it in a precise way to the pace of a chemical reaction, through the use of a new function that he was to call ‘affinity’." [4] In his approach, de Donder gave a new formulation of the second principle, based on such concepts as affinity and degree of evolution of a reaction, considered as a chemical variable. [3] He gained significant reputation in 1923, when he developed his definition of chemical affinity. He pointed out a connection between the chemical affinity and the Gibbs free energy.

Reaction affinity and free energy
Most notable for De Donder is his 1922 proof that connected free energy and chemical affinity. In particular, De Donder showed that for a generic chemical reaction, such as:

In large part, this derivation stems from the 1922 De Donder who, building on the "chemical potential" theories of American mathematical physicist Willard Gibbs and the "free energy" logic of German physician and physicist Hermann von Helmholtz and others, formulated a relation between chemical affinity A and Gibbs free energy G. He showed that if we consider a mixture of chemical species, e.g. a system of reactive chemical entities, with the possibility of chemical reaction, the measure of affinity felt between the reacting species is equal to the negative of the Gibbs free energy of formation ∆G for the reaction, as shown by the following expression: [6]