In human chemistry, The Human Element, symbol Hu, is a popular 2006-2009 Dow Chemical advertising campaign depicting the human as the “missing element” of the periodic table, and was developed in by the advertising agency Draftfcb Chicago, conceived particularly by creative director John Claxton, according to which images of people with the element symbol box, symbol Hu, and atomic number 10E+9, were displayed in magazines and commercials over the course of several years.

Overview
Dow Chemical Company was founded in 1897 by Canadian-born chemist Herbert Dow, and is the second-largest chemical manufacturer in the world. In 2006, Dow hired advertising agency Draftfcb Chicago to rebrand its image with a corporate focus on working together to improve the human condition, the resulting campaign was called “The Human Element”, depicting people as a “human element” analogous to an element on the periodic table. The campaign won the 2008 Effie Award. [8]

In circa 2006, a newly established Dow CEO, Andrew Liveris was interested in making a new philosophical mantra for the company—to make Dow the most respected chemical company in the world—and was anxious to make it a reality. In this direction, Liveris turned to Draftfcb Chicago. Draftfcp creative director John Claxton, whose hobbies are reading science essays and studying human behavior, then got the ball rolling at the first creative meeting. In Claxton’s own words:

“One of the first steps was a creative meeting at our agency during the “pitch process.” I walked into the meeting with a new element for the periodic table. . . not carbon, hydrogen or oxygen, but the Human Element. That pretty much put everything in motion. Including the Human Element on the Periodic Table of the Elements changed the way Dow looked at the world and the way the world looked at Dow. Every creative decision we made from that point on was filtered through the lens of the Human Element, and that’s what took us down a very non-science approach to science advertising.”

The following seems to a sketch of this idea: (Ѻ) 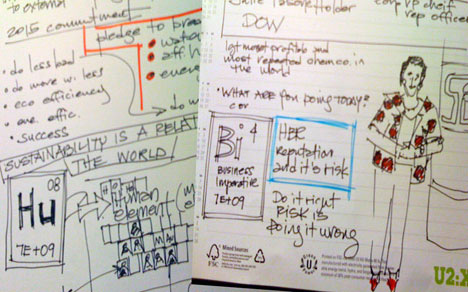 The “voice” of the campaign, was themed on three things: science essays, the writing of American biologist Edward Wilson, and contemporary American poetry. The campaign was very moving for many: “we were completely surprised by the passionate response from people at all levels of society. From teachers to politicians to parents, people were so moved that they felt compelled to write to the company and express their feelings. The campaign struck a nerve in a way that we had never imagined”, says Claxton.

Examples
The following are example depictions the Hu element concept found in magazines, aprons, and T-shirts: