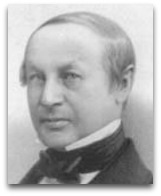 Overview
In 1839, Schwann published a monograph that declared all animals and plants are made from one single fundamental unit, eventually dubbed the “cell”, a term previously coined by Robert Hooke.

Quotes | On
The following are quotes on Schwann:

“When Robert Hooke observed ‘a great many little boxes’ in slices of cork in 1665 through his compound microscope, he compared them to honeycomb and chose a name connoting an empty enclosed space. The teeming interior of the cell and its fundamental role in living organisms remained unguessed for the next two hundred years. Only in 1838 and 1839, with improved optics and theories advanced by botanist Matthias Schleiden and zoologist Theodor Schwann, came suggestions of its broader significance. But the genius of cell theory is the German physician and anatomist Rudolf Virchow, the founder of cellular pathology.”

Quotes | By
The following are quotes by Schwann:

“We set out, therefore, with the supposition that an organized body is not produced by a fundamental power which is guided in its operation by a definite idea, but is developed, according to blind laws of necessity, by powers which, like those of inorganic nature, are established by the very existence of matter. As the elementary materials of organic nature are not different from those of the inorganic kingdom, the source of the organic phenomena can only reside in another combination of these materials, whether it be in a peculiar mode of union of the elementary atoms to form atoms of the second order, or in the arrangement of these conglomerate molecules when forming either the separate morphological elementary parts of organisms, or an entire organism.”

— Theodor Schwann (1939), Microscopic Researches into the Accordance in the Structure and Growth of Animals and Plants [1]

“In the clear fluid, consisting of gum and sugar, granules of protein-compounds are seen swimming about (a), among which a few larger ones are strikingly conspicuous. Around these latter the former are seen conglomerated into the form of a small disc (b,c). Around other discs a clear, sharply defined border may be distinguished, which gradually recedes farther and farther from the disc (the cytoblast), and, finally, can be distinctly recognized to be a young cell (d,e).”