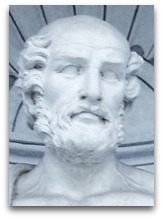 In 45BC, Cicero, in his On the Nature of the Gods, describes Theophrastus’ ideas about god, as well as those of his student Strato, as follows: [1]

“Equally intolerable is the inconsistency of Theophrastus, for at one moment he allots the divine primacy to mind, at another to the heavens, and yet another to the signs of the heavenly stars. Another figure unworthy of attention is Theophrastus’ disciple Strato, the one they call the ‘physicist’, for he proposes that all divine power lies in nature, which bears within it the causes of birth, growth, and diminution, but which lacks all sensation and shape.”

In 167AD, Marcus Aurelius said the following on Theophrastus: [2]

“Theophrastus, in his comparison of bad acts—such a comparison as one would make in accordance with the common notions of mankind—says, like a true philosopher, that the offences which are committed though ‘desire’ are more blamable than those which are committed through ‘anger’. For he who is excited by anger seems to turn away from reason with a certain pain and unconscious contraction; but he who offends though desire, being overpowered by pleasure, seems to be in a manner more intemperate and womanish in his offences.”

In 1659, an anonymous French freethinker, dubbed the Anon Theophrastus, assumed the moniker or mindset of a “Theophrastus Reborn”, and therein penned Theophrastus Redivivus, a 1090-page tome themed as a modern version of Theophrastus’ “On the Gods”, albeit via an explicit and open materialistic atheism purview.

Quotes | On
The following are quotes on Theophrastus:

“The genius of Theophrastus was not less universal than that of Aristotle. He embraced in his meditations almost all the parts of the exact and speculative sciences. We end in Diogenes the list of two-hundred and twenty-seven works which he wrote on grammar, logic, dialectics, oratory, physics, natural history, mathematics, poetry, music, morality and even comedy. Unfortunately, most of these works are lost to us. All that remains is reduced to two treatises on the history of the vegetable kingdom, a treatise on stones, a small number of writings on physics and medicine, and some fragments of moral works, known under the name of Characters.”

Quotes | By
The following are quotes by Theophrastus:
-

“Time is the most valuable thing a man can spend.”

“There is also the problem of why a flame is shaped like a pyramid. Democritus says that as its extremities cool down it contracts into a small shape and eventually tapers to a point.”