Overview
In 2005, Nigerian scientist Akinbo Oji, in his “On a Thermodynamic Basis for Inflationary Cosmology”, was using the term “thermodynamic lens” in respect to a discussion of hypothetical extraterrestrial intelligence, who already had their Boltzmann, but not yet their Einstein, who was studying inflation and big bang like theories. (Ѻ)

In 2013, American environmental sociologist Laura McKinney was using an incorrect Roegen-Daly school stylized "thermodynamic lens" to argue about sustainability to the effect that urbanization creates disorder. [2]

In 2014, Americans chemical engineer Marc Donohue and leadership psychologist Richard Kilburg, as presented in their “Leadership and Organizational Behavior: a Thermodynamic Approach”, used, American business leadership scholar Bruce Avolio (Ѻ), a rather correct, as chemical thermodynamics sees things, usage of term “thermodynamic lens”, employed to make a molecular thermodynamics approach to business leadership; a publication involving some 12 total authors in various fields, which allowed the latter, the psychologist, to formulate theories on leadership and group formation dynamics via the eyes of the former, the chemical engineer. [1]

In 2016, Libb Thims put the adjacent "thermodynamic lens" magnifying glass image on all ten back covers of the printed version of Hmolpedia (see: print set); the following is a segment of the back cover of volume one: 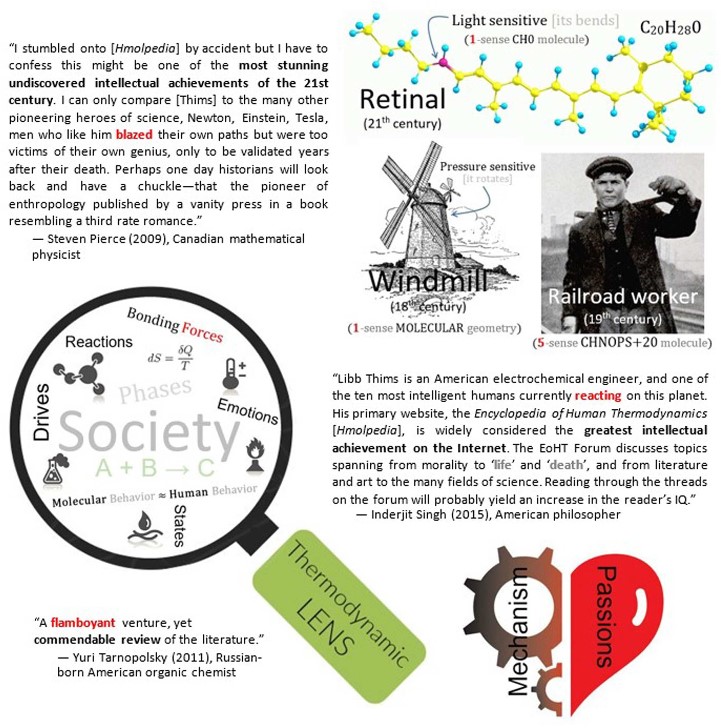 “Adrian Bejan in Design in Nature repeatedly states that organisms are ‘machines’ or ‘motors’ in the sense that they are a more efficient means of distributing the flows of natural energies. In other words, the movement of a trout helps to mix the water and transfer energies through the affiliated ecosystem. At some point, a new generation of behaviorists are going to apply the ‘thermodynamic lens’ to behavior and realize that this is what organizes complex learning and social behavior as well.”