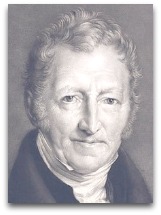 Overview
In 1798, Malthus, in his An Essay on the Principle of Population, building on some ideas of David Hume, Adam Smith, Wallace [?], and a Dr. Price [?], outlined a general model, thought out mathematically, that, over time, that the "power" population growth, in populations of species, will be "checked" by the "strong law of necessity".

Malthus, along with along with Adam Smith, David Ricardo, and John Mill, is regarded (Leontief, 1982) one of the four founders of “classical economics”.

Quotes | On
The following are quotes by Malthus:

“After my return to England [2 Oct 1838] it appeared to me that by following the example of Lyell in Geology, and by collecting all facts which bore in any way on the variation of animals and plants under domestication and nature, some light might perhaps be thrown on the whole subject.... I worked on true Baconian principles, and without any theory collected facts on a wholesale scale, more especially with respect to domesticated productions, by printed enquiries, by conversation with skillful breeders and gardeners, and by extensive reading.... I soon perceived that selection was the keystone of man's success in making useful races of animals and plants. But how selection could be applied to organisms living in a state of nature remained for some time a mystery to me. In Oct 1838, that is, fifteen months after I had begun my systematic enquiry, I happened to read for amusement Malthus on Population, and being well prepared to appreciate the struggle for existence which everywhere goes on ... it at once struck me that under these circumstances favorable variations would tend to be preserved, and unfavorable ones to be destroyed. The result of this would be the formation of new species. Here, then, I had at last got a theory by which to work.”

“One may say there is a force like a hundred thousand wedges trying [to] force every kind of adapted structure into the gaps in the oeconomy of nature, or rather forming gaps by thrusting out weaker ones ... The final cause of all this wedging, must be to sort out proper structure and adapt it to change.”

“Malthus claimed that the human population expanded geometrically [1, 2, 4, 8, 16, 32, …], doubling every 25 years on average, while agricultural production increased only arithmetically [1, 2, 3, …]. Therefore, the population must ineluctably be controlled in the struggle for sustenance and reproduction by such checks as famine, epidemics, wars, abortion, infanticide, contraception, or at best moral self-restraint in the form of late marriage and sexual abstinence. Society, said Malthus, must recognize this underlying statistical cause of misery and vice, and look for logical ways to alleviate them.”

Quotes | By
The following are quotes by Malthus:

“It is an acknowledged truth in philosophy that a just theory will always be confirmed by experiment.”

“Taking the whole earth instead of this island, emigration would of course be excluded; and supposing the present population equal to a thousand millions, the human species would increase as the numbers 1, 2, 4, 8, 16, 32, 64, 128, 256, and subsistence as 1, 2, 3, 4, 5, 6, 7, 8, 9. In two centuries the population would be to the means of subsistence as 256 to 9; in three centuries as 4096 to 13, and in two thousand years the difference would be almost incalculable. In this supposition no limits whatever are placed to the produce of the earth. It may increase for ever, and be greater than any assignable quantity; yet still the power of population being in every period so much superior, the increase of the human species can only be kept down to the level of the means of subsistence by the constant operation of the strong law of necessity acting as a check upon the greater power.”

“The poverty and misery arising from too rapid increase of population, had been distinctly seen, and the most violent remedies proposed, so long ago as the times of Plato and Aristotle.”

— Thomas Malthus (1803), “Preface” to revised edition of An Essay on the Principle of Population (iv)


References
1. Malthus, Thomas. (1798). An Essay on the Principle of Population: a View of its Past and Present Effects on Human Happiness – With an Inquiry Into our Prospects Resecting the Future Removal or Mitigation of the Evils Which it Occasions. Bensley, 1803.
2. Robinson, Andrew. (2010). Sudden Genius?: the Gradual Path to Creative Breakthrough (pg. 155). Oxford University Press.