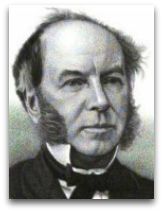 In existographies, Thomas Andrews (1813-1885) (CR:10) was an Irish chemist and physician noted for his 1869 article “On the Continuity of the Gaseous and Liquid States of Matter” in which, building on the work of Charles Cagniard (1822), Michael Faraday (1823), and a few others, he discusses the ‘critical point’ of a fluid and the results of his experiments on carbonic acid, H2CO3, which showed that the acid in its liquid state may be carried to gaseous state without losing its homogeneity. [1]

Gibbs
Andrews' 1869 article was famously cited by American engineer Willard Gibbs in his two 1873 graphical thermodynamics articles and in his 1876 On the Equilibrium of Heterogeneous Substances. [2]

Andrews’ follow-up 1876 article, on the same subject, “On the Gaseous State of Matter”, was cited by Gibbs in his 1879 article. [4] Andrews is also noted, supposedly, for his work on the subject of the ‘heat of combination’, such as his 1841 article “On the Heat Developed During the Combination of Acids and Bases”, and others to follow. [5]

Maxwell
Gibbs use of Andrews’ experimental results in the development of his graphical method of representing the various states of a substance on an energy, entropy, volume coordinates plot, stimulated the production of Irish physicist James Maxwell’s 1874 thermodynamic surface of water, and two follow-up communication letters with Andrews on the construction of his surface. [3] Maxwell had made reference to Andrews’ experiments in his 1874 article “Van der Waals on the Continuity of the Gaseous and Liquid States”. [7]

Education
At an early age, Andrews attended the Belfast Academy and then the Academical Institution, where studied mathematics under James Thomson (mathematician).

“Thomas should enter Dublin College, and return home from that, without pursuing the usual course of study there. He should at the same time be bound nominally to a surgeon, after which he should go to France and Italy, and remain there until he has satisfied his own mind; and, returning from thence, should attend as many terms in Dublin as would qualify him for taking the degree of Bachelor of Arts, and either or both the other degrees in Surgery and Physics; taking care in these pursuits, never to relinquish the idea of becoming ultimately a merchant if it became his duty or interest to do so.”

Curiously, Andrews, over the next fifteen years, enacted and completed this plan down to the last detail. In 1830, Andrews went to Paris to study the subjects of zoology, and chemistry in its application in the arts, botany, vegetable physics, mineralogy, and geology; during which time he became an apprentice in the laboratory of French chemist Jean Dumas, attended Dumas’ chemistry course at the College of France, and met French chemist Joseph Gay-Lussac, eponym of Gay-Lussac's law (P = kT, at constant volume ). He also interned at the Hopital de la Pitie.

Following his studies in Paris, Andrews completed spent four undergraduate years in Trinity College, Dublin, studied classics, science, and medicine, where he attended the lectures of Irish mathematician William Hamilton on astronomy. Concurrently, he attending lectures in the School of Physic in Ireland, in the Meath Hospital, and in the Richmond Surgical Hospital.

In 1835, Andrews completed his MD at the Edinburgh Medical School, University of Edinburgh, after which he started a successful medical practice in his native Belfast; while simultaneously giving instruction in chemistry at the Academical Institution. In 1845, he was appointed vice-president of the newly established Queen's University of Belfast, and professor of chemistry there; two offices that he held until his retirement in 1879.