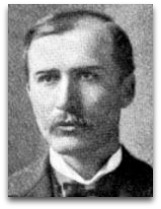 In economic thermodynamics, Thomas Carver (1865-1961) was an American economist noted, according to Oliver Reiser, for his 1924 book The Economy of Human Energy, in which he argued that life processes of social groups consist in transforming the largest possible sum of solar energy into human energy, whereby civilization is a device for storing energy, and social welfare depends upon its utilization in such ways as to increase the sum total of utilization of the sun’s energy. [1]

Storing energy in a social sense
Some parts of his chapter on “Storing of Surplus Energy”, subsection "storing in a social sense", in which he talks about human energy stored socially in a pile of stone (e.g. the pyramids), in terms of the way in which the shape and meaning of the pile “inspire” people thereafter economically, such as:

“The pile of stone—pyramidal in shape, called Cheops—of whatever sort, cannot of course, be burned in the human body and physically transformed into vital energy, heat, or mechanical power as food can. It may, however, inspire to higher endeavor and thus be a factor in the economizing of the energy of people who are thus inspired.”

were previously published in his 1915 Essays in Social Justice. [2] In this chapter he also discusses his views on the second law, albeit with reference to the "universal dissipation and degradation of energy" as he sees things.

“Carver claims that to "transfer the maximum of solar into human energy" is the function of society. The sun supplies energy; and energy produces life. Life is maintained and sustained through the transfer of "solar energy into vital." Man's energy may be spent in the production of either productive or non-productive energy. An excess of productive energy over non-productive builds up a surplus; and the economic use of the surplus means progress. An equilibrium of energy is brought about when a species is just able to maintain itself, and no matter what the forces or their strength, there is always a tendency in this direction.”