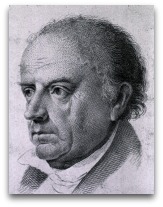 Overview
In 1829, Cooper anonymously published a 14-page pamphlet Fabrication of the Pentateuch: Proved by Anachronism Contained in Those Books, citing Benedict Spinoza (Tractatus Theologico Politucs), Spanheim (Dubia Evangelica), Pere Simon (Historie Critique dis Vieux Testament), and Constantin Volney (Recerches Nouvelles sur l’History Ancienne, Volume One), wherein he addresses the conflict with growing modern sciences, e.g. geology, chemistry, physics, etc., with the creation defined in the Old Testament, along with Moses disproofs, e.g. Moses penned his own death, etc., which got him dismissed from his position as president of University of South Carolina. [1]

Quotes | On
The following are quotes on Cooper:

“Judge Cooper of Pennsylvania, a political refuge with Priestly from the fires and mobs of Birmingham, is one of the ablest men in America, and in several branches of science, the law opinion which he mentions, I have received, and a more luminous one has not been seen.”

“Scarcely anything that has happened to me in my curious life, has made a deeper impression upon me that that such a learned ingenious scientific and talented madcap as Cooper, could have influence enough to make Priestley my enemy.”

“It is evident that the notion of spirits, imagined by savages and adopted by the ignorant, is calculated to retard the progress of knowledge, since it precludes our researches into the true cause of the effects which we see, by keeping the human mind in apathy and sloth. This state of ignorance may be very useful to crafty theologians, but very injurious to society. This is the reason, however, why in all ages priests have persecuted those who have been the first to give natural explanations of the phenomena of nature— as witness: Anaxagoras, Aristotle, Galileo, Descartes—and, more recently, Richard Carlile, William Lawrence, Robert Taylor, and Abner Kneeland; to which we may add the name of the learned and venerable Thomas Cooper MD, lately president of Columbia College, South Carolina.”

Quotes | By
The following are quotes by Cooper:

“I have heard the question put so frequently: ‘How do your opinions agree with the account given by Moses?’ that I am almost compelled in self-defense to meet this difficulty in all its strength, I have had repeated and practical experience, that the interference of the clergy in questions of science is always for the purpose of suppressing and not of promoting knowledge; and on that point now before us, I feel it absolutely necessary for my own peace, that those gentleman and I should understand each other.”