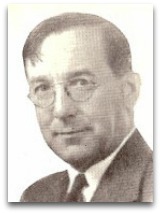 In human chemistry, Thomas Dreier (1884-1976) was an American editor, writer, and business theorist noted for his human chemical theory, developed between 1910 and 1954, that people are “human chemicals” and that business operations should be run by the executive “human chemist”, just as chemists run and operate the reactions of the elements their laboratories

The following is an excellent take on Dreier's point of view: [7]

“Watch groups of people working or playing together and you will be startled to discover how ‘chemical’ are their reactions to one another. Once you acquire even rudiments of human chemistry, you will be baffled less often by people, and become impatient or angry less often at the (to you) annoying things they do. You will see and judge them for what they are—different kinds of human chemicals, obeying the laws of their natures as you and I obey the laws of our natures.”

Dreier’s first publication on the subject of people modeled as reactive chemicals was the 1910 booklet Human Chemicals (1910). [1] It was described by interviewer Mirian deFord as “an interesting theory of human contacts”. [2]

Human chemists
In 1922, Dreier conceived of the idea that the executive or business manager is a chemist with his or her employees being the reactants: [3]

“It flashed into my mind the other night that an executive is like a chemist. He has a laboratory stocked with seventy-eight elementary chemicals. With that stock he can make absolutely every substance needed in his daily life if he possesses the necessary knowledge to combine the elements.”

The mention of 78 "elementary chemicals" seems to be alluding to the fact that during this decade about 81 chemical elements were known to exist, which combined to form molecules and people. Hence, it is likely that Dreier had read a figure giving the count at 78-elements. This "flash of insight", as Dreier calls it, would later be expanded into the 37-page booklet The Executive as a Human Chemist, published in 1954. [4] This booklet prompted response articles, such as “Do People ‘Explode’ in Your Office?”. [5]

Education
After high school, Dreier began to train for the priesthood. Soon thereafter, he abandoned that goal and at one point started to go to the University of Wisconsin, but in the process got a job at a Madison newspaper instead.

By 1915, Dreier was working at University Press, Cambridge, and had been an editor of a half a dozen magazines, and was a household name among business men seeking higher inspiration. During this period, he was conducting what he called the “Thomas Dreier Service”, kind of like a lay preacher type of sermon, in what he considered an institution organized to create, assemble and distribute ideas which will help render service to society, through articles, lectures, and private correspondence.

The seeds of Dreier’s theories and writings first appeared as private letters to his friends. He stated that the impulse toward the kind of writing he did, came to him years ago, when he was loafing in his canoe out in Wisconsin, and found a verse that appealed to him so much that he wished that lots of people could read it too. A significant influence to Dreier were American writer Elbert Hubbard and Aristotle. [2]

From 1908 to 1909, Dreier was a business manager of a publishing company called Sheldon University Press, which explains from where he bases “executive chemist” theories, and managing editor of Business Philosopher. [6]